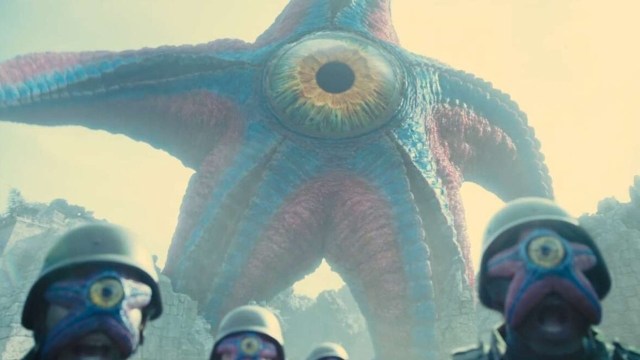 The Suicide Squad might not have set the box office alight when it landed in cinemas a year ago, but DC diehards loved it because it wholeheartedly embraced the wonderful weirdness of the comic book universe. Case in point, Starro the Conqueror, a gigantic mind-controlling starfish that fans had long thought destined to never be adapted into a movie, served as the main antagonist. But it turns out Starro isn’t the craziest starfish-themed supervillain out there. I have two words for you: Starfish Hitler.

Yes, you read that right. A truly mind-boggling clip from classic tokusatsu show Kamen Rider X (1974) has been doing the rounds on Twitter today after @LiveFaustDieJung shared it along with the caption, “Unless you’ve seen this before I promise you, you have no f***ing idea how this ends.” The clip begins with our hero Jim Keisuke (Ryo Hayami) facing an alien starfish that keeps evolving until… Well, you just need to see it for yourself:

That’s right, Starfish Hitler. For those not well-versed in Kamen Rider lore, this clip is real and Starfish Hitler ⁠— that’s a phrase I didn’t expect to write when waking up this morning ⁠— is a genuine monster-of-the-week from that show. For DC fans, though, it only brings to mind Starro the Conqueror. Brilliantly, director James Gunn got in on the action and retweeted the clip, joking that it was a “deleted scene from The Suicide Squad.”

Sadly, Starfish Hitler ⁠— how many more times can I squeeze that name into this piece? ⁠— didn’t actually appear in The Suicide Squad. That said, Gunn did deal with themes of neo-Nazism, in a much more nuanced way, in Peacemaker, so this clip is essentially both of his DC projects to date put in a blender. As comic book writer Jimmy Palmiotti quipped, hopefully, this means we’ll be getting a Starfish Hitler HBO Max series soon.

And one more time for the road… Starfish Hitler.