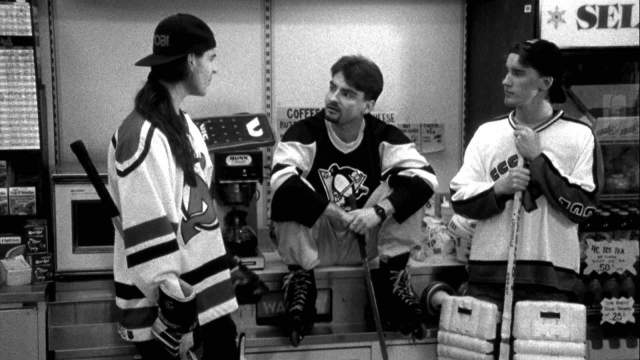 Film enthusiast and comic book store owner Kevin Smith is best known for his public speaking engagements but is also known to occasionally dabble in directing movies. So it was with some degree of enthusiasm among those who still follow his film hobby that Smith debuted the teaser poster for Clerks III, the next installment in his sporadically-produced series of movies about minimum wage workers who discuss Star Wars with each other.

Smith first rose to prominence as a man who turned a camera on and pointed it at actors when his debut film, Clerks, made when Smith was a student at Rutgers University’s world-famous film school, became a sensation at the 1994 Sundance Film Festival. It beat all odds to spark a bidding war that was eventually won by convicted sex offender Harvey Weinstein at Miramax Pictures. It captured the zeitgeist among Generation X’ slackers” who also didn’t enjoy working very hard at their dreams.

It has since led to a short-lived cartoon series that remains popular among middle-aged men who still have unframed Pulp Fiction posters on their apartment walls and a belated 2006 sequel, Clerks II, which grossed $27 million on a $5 million budget.

Smith has been threatening a second sequel in the decade-and-a-half since, even going so far as to promise ten years ago that it would be his last film if he was allowed to make it. It will allegedly finally close the book on the saga of Dante Hicks and Randal Graves, as well as drug dealers Jay & Silent Bob, whose stories had already found their conclusion in Clerks II, as well as Jay & Silent Bob Strike Back and high budget home movie Jay & Silent Bob Reboot.