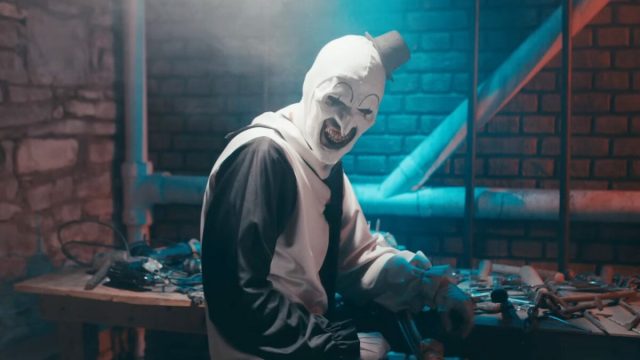 As folks around the country begin to expand their palates and prepare their stomachs for the ever-popular festivities of Thanksgiving, us fear fanatics at We Got This Covered are gearing up to present another daily horror roundup — and this one is filled with plenty of spooky goodies that will wet your whistle before tomorrow’s holiday. In today’s juicy collection of stories, Terrifier’s Damien Leone has hinted at the possibility of a blood-soaked third entry in the fear-inducing franchise while the reaffirmation of a notable scream queen could ignite a genre battle.

So, before you thaw out those turkeys (or tofurkys), follow along as we carefully slice into the latest updates in the horror pipeline.

Netflix’s horror extravaganza Wednesday is finally available to binge on the platform, and folks are definitely taking time out of their busy schedules to praise leading star Jenna Ortega’s performance in the show. As a result, the notable horror actress has been re-crowned with scream queen status, which she previously earned for impressive performances in Ti West’s X and Scream (2022). With that being said, the majority of horror fans have remained adamant that Mia Goth is this generation’s undisputed scream queen, although Ortega is definitely here to try and steal that status. It’s a battle of the best, without a doubt.

Is Art the Clown returning for a fear-inducing third outing?

Since the release of both Terrifier films, the entire horror world has been taken by storm in regard to the narrative’s violent villain, Art the Clown. In the past, the immortal figure has successfully terrified plenty of moviegoers and horror fanatics alike — which has apparently led director Damien Leone down the path of teasing a potential third outing for the crazed clown. In a recent tweet, Leone hinted that Terrifier 3 will be absolutely “wild” and pick up where the previous movie’s events left off. The thought of Art the Clown making a comeback is already giving us intense shivers.

With a title as thrilling as Something in the Dirt, it’s certainly no surprise that the horror flick has become a hot commodity amongst Redditors on the r/horror platform. Reeling from the momentum of the collaboration between Aaron Moorhead and Justin Benson, horror fanatics are completely intrigued now that the genre flick is available to stream online. And with a 90 percent Rotten Tomatoes score, plenty of compliments backing up the movie, and a ton of anticipation surrounding it, it’s safe to say that we’ll know what horror fans will be watching this upcoming weekend.

See you back here on Monday, Terrifiers, for another daily horror roundup. For now, have a wonderful Thanksgiving!