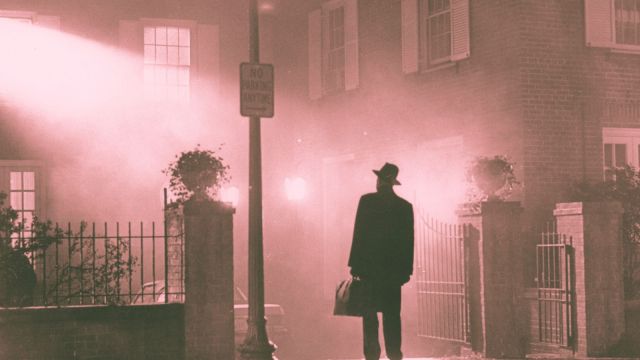 Settle in, spooky stans — because there’s plenty of horror news to unpack on this bright and sunny day! While the hunt is definitely on for the perfect Halloween costume for this year’s array of spine-tingling parties, headlines of all shapes, sizes, and colors are detailing the hottest updates in the realm of horror. In today’s juicy roundup, the eye-opening headlines relate to a recent head-turning shun for a key component for David Gordon Green’s The Exorcist reboot. In addition, a memorable franchise veteran is hopeful that their legacy character will make their long-awaited return.

So, before you carefully pick out your assortment of Halloween candy to pass out to those adorable trick-or-treaters, feast your eyes on the latest updates in the eerie genre.

With legacy characters like Laurie Strode (Halloween) and Sally Hardesty (The Texas Chainsaw Massacre) making their long-awaited returns to their respective rebooted franchises, another familiar figure could possibly be returning to one of the greatest franchises in the history of cinematic horror — and that character would be Nancy Thompson from A Nightmare on Elm Street. Portrayed by the gracious Heather Langencamp, Thompson is the central protagonist of the franchise and is often engaged in battle with notable horror villain Freddy Krueger. Luckily for genre fans, Langencamp has maintained the idea that she would be open to returning to play Nancy in the future — although nothing official is set in stone just yet.

Over the last several months, horror hardcores have been patiently anticipating the upcoming reboot of The Exorcist franchise, which is set to be helmed by Halloween Ends’ filmmaker David Gordon Green. The upcoming horror project is scheduled to serve as a direct sequel to the 1973 original, which was directed by the incomparable William Friedkin — who has apparently been left out of developmental choices for the franchise reboot. In fact, it was Green himself who revealed that Friedkin has no major hand in the movie’s creation and reimagining, which is certainly a surprise to fans, considering John Carpenter played a part in Green’s updated Halloween trilogy.

For years now, Rob Zombie’s Halloween films have been subjected to constant ridicule and disdain from franchise veterans — although that criticism has now apparently been laid to rest for good. After the worldwide slaughtering that Halloween Ends has endured over the last week, several Halloween stans are backtracking on their initial belief that Zombie’s franchise installments were awful. Instead, fans are celebrating Zombie’s Halloween II (2009) flick as a far superior sequel in comparison to David Gordon Green’s latest horror chapter. Sorry, Rob, maybe we’re were all just a bit too harsh the first time around.

See you back here tomorrow, Rob Zombie stans, for your daily roundup of horror news.