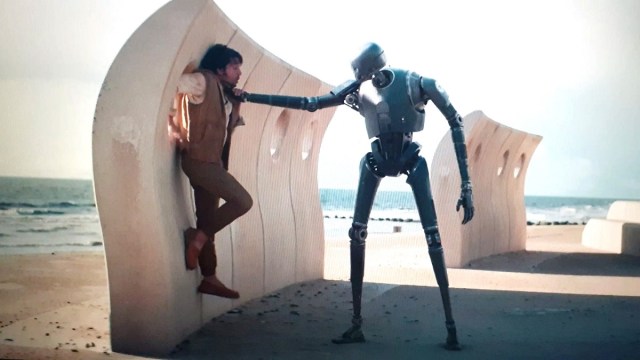 It looks like it’s the day to praise Star Wars villains, with fans heaping some praise onto one of Andor’s best characters while taking a moment to acknowledge one of The Mandalorian‘s finest performances. Elsewhere in Star Wars, the official site has a fun preview of the latest Doctor Aphra comic (get this character a Disney Plus show already), which shows the character dealing with her “simulated Sith” abilities.

Other than that fans are still praising Andor episode seven, which has continued the show’s focus on character over action, but delivered an exceptional cocktail party scene, turned London’s Barbican center into Coruscant, and introduced us to Star Wars‘ take on Miami.

Denise Gough has been knocking it out of the park as ISB supervisor Dedra Meera in Andor. Fans have griped for years that Imperial characters are shown as incompetent, arrogant, and ineffective, which makes their being outwitted and beaten less satisfying. Dedra plays differently and fans are here for her.

Over the course of Andor, she’s been the only ISB agent to recognize that there’s a low-key pattern developing of the Rebels seizing Imperial tech. Dedra has also pushed back against the Empire’s rigidity, successfully arguing that the Rebels won’t care about the arbitrary way the galaxy has been divided into various regions.

We may soon see if Dedra has as much talent in the field as behind a desk. As of the most recent episode she appeared to be on the verge of connecting the dots on the Rebellion, so we should see her crossing paths with Cassian Andor in person sooner rather than later.

Giancarlo Esposito’s Moff Gideon ended The Mandalorian season two at a low point. His feared army of Dark Troopers dropped like flies against Luke Skywalker, his ships were seized by the New Republic, and he’s now in custody as a criminal. But the Gideon story won’t stop here, as Esposito is already talking up a season three storyline that’s “off the chain”.

So it’s understandable that fans are taking some time to praise Gideon, saying that he’s simultaneously cool and hateable, and works despite not having a broadly sympathetic backstory like Darth Vader and Darth Maul. Replies agree, though, it’s noted that Esposito’s natural charisma and performance skills are doing a lot of heavy lifting here.

Even so, season three should see Gideon with a serious chip on his shoulder about the season two finale, and may be out for revenge against Din Djarin and Luke Skywalker. We can’t wait to see how this shakes out.

Disney’s sequel trilogy is a poster child for missed opportunities. They had the talent, the ideas, and the characters, but poor advance planning and paying too much attention to internet complaints resulted in the awful The Rise of Skywalker. But, incredibly, fans have found a subtle moment in the movie that actually works:

It’s worth remembering that the sequel trilogy is stacked with great actors. We’ve got original trilogy icons like Harrison Hord, Carrie Fisher, and Mark Hamill, together with award-winning names like Adam Driver, Gwendoline Christie, Lupita Nyong’o, Max von Sydow, Laura Dern, and Benicia del Toro (among many others). But of all of those, Oscar Isaac might bring the most raw charisma to a galaxy far, far away.

This clip proves that, showing a fun character moment between Poe Dameron and Zorii Bliss with zero dialogue (even more impressive given that Zorii wears a full-face helmet). We can’t help but wonder what the sequel trilogy might have been like if Poe Dameron had a more central role, but that’ll have to stay in the realms of fanfiction…

We’re now less than a week away from Tales of the Jedi so expect the hype train to pick up soon. The CG show will flesh out the stories of Qui-Gon Jinn, Mace Windu, Count Dooku, and Ahsoka Tano before the during the prequel era, so should give us a lot to chew on. We’re particularly hyped for Liam Neeson’s return as Qui-Gon, so let’s start counting the days.