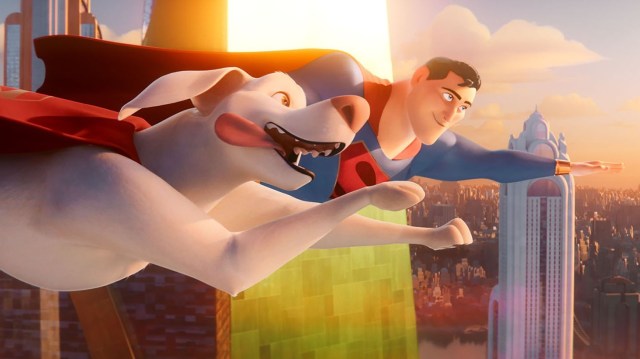 With every Hollywood superstar rushing to collect a super-size Marvel paycheck, it may seem a bit odd that Dwayne “The Rock” Johnson would not only buck the trend and headline as the titular character in the upcoming DCEU film Black Adam, but that he’d double down and also star in DC’s animated children’s film DC’s League of Super Pets, about the animal companions of superheroes who also fight crime.

But speaking with Comicbook.com in advance of this weekend’s San Diego Comic-Con, the film’s producer Hiram Garcia explained that The Rock does it for the love of D.C. Comics’ brand of superhero storytelling. He says he first got the call while in the middle of production for Red Notice, the Netflix original action film co-starring The Rock, Green Lantern’s Ryan Reynolds, and Wonder Woman herself Gal Gadot. It seemed to be kismet:

“We love DC, so it’s always been a priority for me, Danny [Garcia], Dwayne [Johnson], to do as much as we can and be able to tell stories in this space. So right around the time when we were filming Red Notice, I got a call from our agent and it was funny.”

He then explained that he got really excited when he realized it was the chance to tell the story of Superman’s pet dog:

“I actually took a little bit of offense to it because he goes, ‘Look, there’s something going on over here that these guys are working on. And are you familiar that Superman’s got a dog?’ I’m like Krypto, of course I know Superman’s got a dog. … There’s an understanding there… So I was fired up right away when I realized that there was an opportunity to tell the story of the League of Super-Pets and kind of get into this deep cut, if you would, in the DC Universe. Being able to tell the story about the pets of these great superheroes, right?”

At the end of the day, Garcia says that if he can’t have fun, then there’s no point in making a movie where Wonder Woman adopts a potbelly pig that can grow several times its own size:

“And … you’re always looking for fun ways to tell stories about characters that the world’s familiar with, but the perspective from their pets was really intriguing. And obviously, we were working on Black Adam, which is a tone in itself where it’s very edgy. It’s a bit dark, aggressive. And we liked the idea of being able to tell a story that was on the other side of the spectrum, a little bit more family oriented, kid-friendly, something that the adults can get but still play strong for the kids,”

DC’s League of Super Pets opens wide July 29, and is most likely the reason the premiere of Brad Pitt’s Bullet Train got pushed back a week.