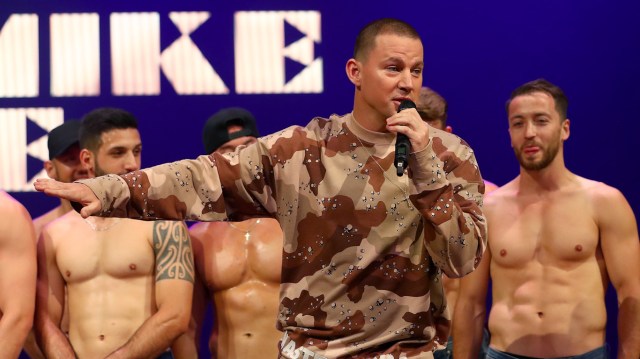 On Feb 10, director Steven Soderbergh and star Channing Tatum will give the world Magic Mike’s Last Dance, which has been called the Super Bowl of dancing due to a super-extended finale dance sequence that not only has fans aquiver with anticipation, but fans of filmed dance slightly agog.

Director Steven Soderbergh confirms the project will end with 30 minutes of straight dancing in a new article published by Empire. You read that right: a full half hour. Sure, there are other dance movies in the canon with elaborate, extended choreography — think Footloose, Black Swan, An American in Paris, You Got Served, The Red Shoes — but this Magic Mike number could contain Mac’s legendary dance number from It’s Always Sunny in Philadelphia played end to end, six times.

While it was apparently a challenge to shoot, their location — much like Tatum — has no bad angles. In an effort to process this new development in a manner befitting the occasion, fans are demurely expressing purely academic interest. Ahem.

Most responses to the information have been either surprised, or thirsty, or both as of this story’s filing, but, for others, it represents a bygone era of cinema. In a world where so much is computer-generated, wherein actors stand in front of a giant screen in a warehouse, this epic forthcoming chapter of choreography restores practical performance, and is humorously being compared to a sequence made by Peter Jackson, to great acclaim.

Later, another user says they are diving back into an earlier dance film series Tatum appeared in that also featured lengthy dance routines, and seems to opine that this filmmaking decision should be applauded.

Audiences will see if the final chapter in the Mike saga, and its marathon bump, grind, duck walk, death drop extravaganza, lives up to the hype soon enough. Meanwhile, the first two are available on HBO Max. The forthcoming swan song allegedly experienced some behind-the-scenes drama in the wake of Will Smith’s infamous Oscars slap, though this has been denied, and some casting changes took place as well when Salma Hayek was brought in to replace former star Thandiwe Newton.