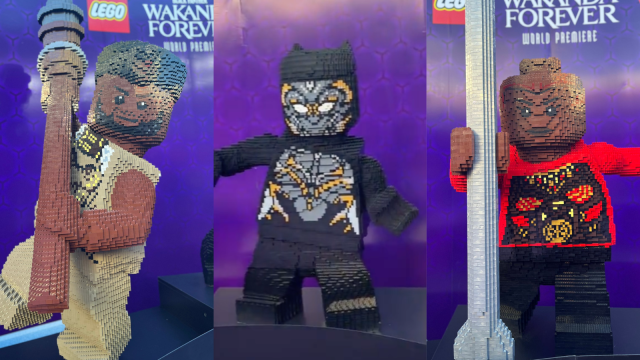 The red carpet premiere for Black Panther: Wakanda Forever is showcasing the franchise’s greatest heroes, but it’s not just the cast and cosplay that captured fans’ attention. Marvel Studios presented live-sized LEGO figures of the film’s main characters, showcasing their strength and power in a different light.

Marvel shared images and videos of the life-size mini-figures as part of the promotion for the upcoming Black Panther: Wakanda Forever Lego set. These Minifigures display some of the main characters, such as M’Baku and Namor. LEGO has also showcased the brand-new Black Panther, but don’t worry — the hero’s new identity has not yet been revealed.

Available for purchase on the Target website, the LEGO set is just one of the few collectible products that launched their Black Panther: Wakanda Forever collection. Funko Pop! also revealed its brand-new Black Panther figures back in late July. The set features 10 characters from the film, turned into figurines for fans to collect.

Black Panther: Wakanda Forever will continue to tell Wakanda’s story despite the death of Chadwick Boseman. The film will mark the debut of Riri Williams aka Ironheart, played by Dominique Thorne, and the sub-mariner, Namor, played by Tenoch Huerta. Both cast and crew have confirmed that the film is a tribute to Boseman and that they won’t be recreating T’Challa through CGI.

At the moment, it is still unknown who will be the next Black Panther, but fans are convinced that Shuri will be carrying the superhero name.

Black Panther: Wakanda Forever will come out in theaters on Nov. 11, 2022.