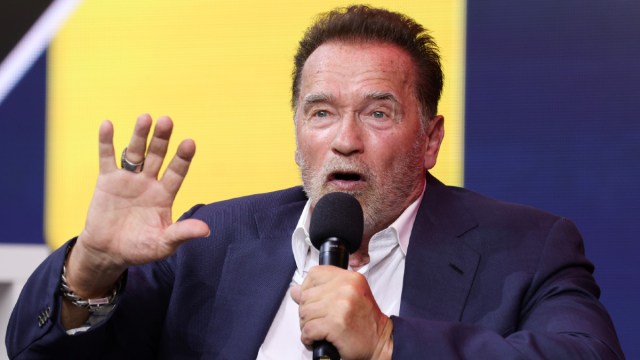 British-Australian actress Miriam Margolyes, who is perhaps best known to American audiences for her role of Professor Pomona Sprout in the Harry Potter franchise, appeared on news.com.au’s I’ve Got News For You podcast this week, where she spilled some stinky gossip about Arnold Schwarzenegger, whom she worked with on the 1999 supernatural thriller End of Days.

Specifically, Margolyes recalled how the man who would go on to become the governor of California farted in her face during a take. The topic came up when the 81-year-old was asked if there was anyone she had ever worked with who she didn’t like over the course of her six-decade-spanning career.

“He’s a bit too full of himself,” Margolyes said when pressed on what in particular she didn’t like about Schwarzenegger. “And I don’t care for him at all. He’s a Republican, which I don’t like, and he was actually quite rude. He farted in my face. Now, I fart, of course I do — but I don’t fart in people’s faces. He did it deliberately, right in my face.”

When asked when and where it happened, Margolyes said she couldn’t remember the date, but it had been during the filming of the movie but that it had been in Log Angeles. “I was playing Satan’s sister and he was killing me, so he had me in a position where I couldn’t escape, lying on the floor, and he just farted,” she continued. “It wasn’t on film, it was on one of the pauses, but I haven’t forgiven him for it.”

Clearly, she hasn’t! We have so many questions, though — was it a joke? Did he apologize for the carbon emission? In any case, even if he did, it seems as though the apology didn’t take.

In any case, Schwarzenegger has yet to comment on the gassy scandal, but we’re sure all these years later he probably feels just terrible about it.