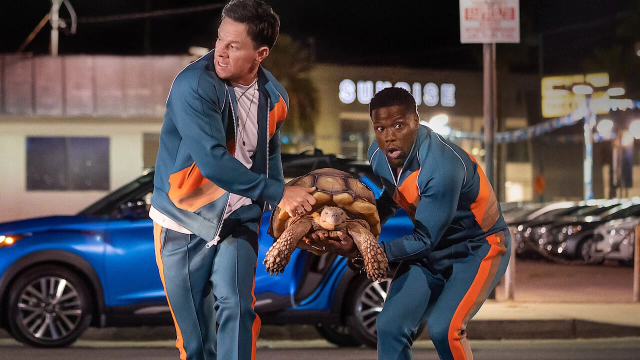 August 26 has been a pretty busy day for movies; the supernatural horror feature The Invitation just dropped into theaters, Sylvester Stallone’s superhero flick Samaritan made its way to Amazon Prime Video, and Netflix put forth Me Time, the Kevin Hart and Mark Wahlberg buddy comedy.

These films may not be in direct competition with one another, and Netflix should be overwhelmingly grateful for that, seeing as Me Time is getting panned across the board by critics.

The film stars Kevin Hart as Sonny Fisher, a stay-at-home dad whose wife insists that she take their two kids on a trip so as to give Sonny a much-deserved break. During this break, he reconnects with an old friend from college, Huck Dembo (Wahlberg), whose idea of a good time is a bit more death-defying than Sonny might be able to handle.

Unfortunately, critics’ idea of a good time seems to involve steering clear of the movie altogether, with William Bibbiani of The Wrap suggesting the film is nothing more than cheap Netflix product placement.

Cinema purists may be loath to admit it, but there are certain advantages to streaming a movie over going to a theater. You’re in the comfort of your own home, for example. So when you’re watching a film like “Me Time” and you feel like walking out, there’s no shame in that.

William Bibbiani via The Wrap

Deadline‘s Valerie Complex also blasted the film, noting its distinct lack of laughs and poor chemistry between the two leads.

Sure, there is something to be said about the film’s overall theme of not judging a book by its cover or how one doesn’t have to look far for happiness, but it’s buried under outdated gags and fart jokes.

And James Marsh of the South China Morning Post dismissed it as just another frat-boy comedy whose reliance on Hart and Wahlberg’s audience-attracting names wasn’t nearly enough.

The loose, lazy scripting from writer-director John Hamburg too often relies on Hart and Wahlberg to keep the fun going, rather than generate genuine laughs from actual jokes.

Me Time is available to stream on Netflix.