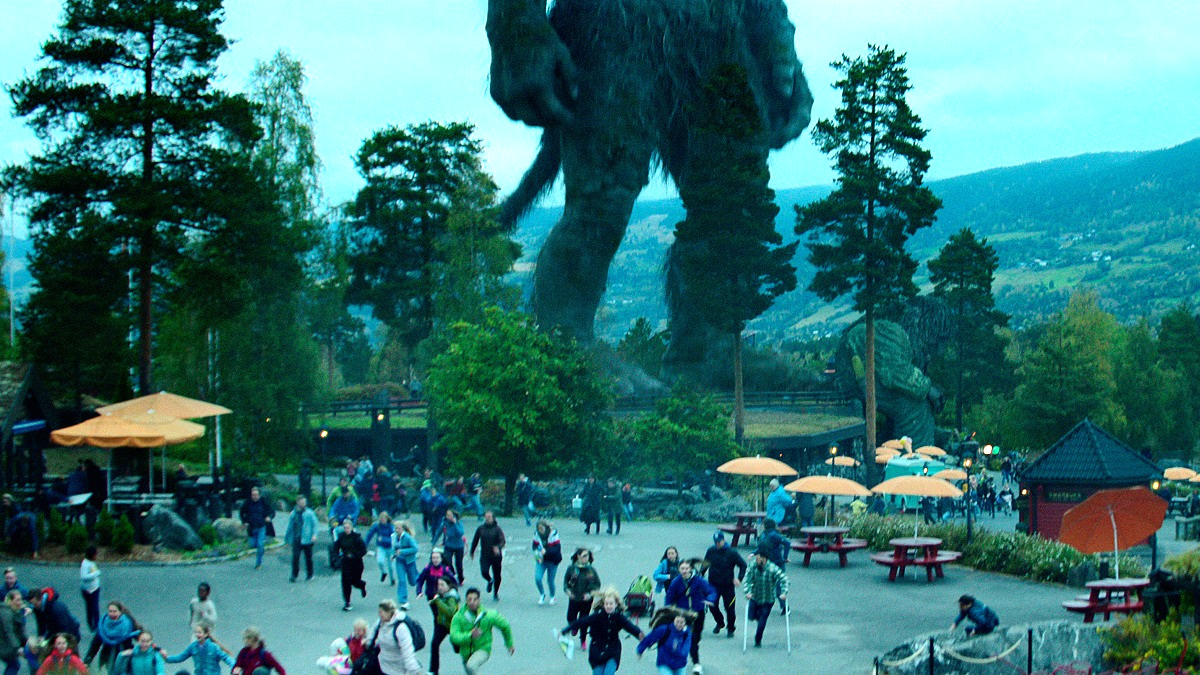 The Scandinavian folklore-based film Troll recently arrived at the Netflix library. This movie studies and takes a deeper dive into Norwegian history, including Trolls, the mythical creatures in their folklore. Directed by Roar Uthaug, its story entirely changes the initial perspective that Trolls are antagonistic mythical creatures as the audience gets increasingly more motivated to understand and cherish them.

The Netflix original explores a world where Trolls exist, through the experience of Nora Tidemann (Ine Marie Wilmann), a paleontologist following her father, Tobias’ (Gard B.Eidsvold), footsteps after he was cast out by the government as a consequence of his research on trolls, which was deemed as false. The film takes a turn for the worse when an ancient Troll awakens after the government’s excavation team bombs the Dovre mountains for research purposes. As it is one of the Troll lairs, it awakens the ancient creature, who resorts to causing havoc and destruction everywhere it goes. As it reaches the Norwegian capital of Oslo, the government plans to eliminate this threat as soon as possible.

This interesting, albeit slightly terrifying Norwegian flick, ends with a particularly confusing and complex post-credit scene, after its powerful conclusion. So, for those that may be just a tad bit baffled about its enigmatic ending, here is We Got This Covered’s take on the post-credits scene, and what the future holds for the sequel.

Through the heartbreaking ending scene when the Troll was slain by Nora and Andreas (Kim S. Falck-Jørgensen) after their convoluted plan to lure it into the lair and kill it with high-intensity lights, the film brought up the possible underlining morality of it all. As Nora comes to the realization that the Troll was harmless when it was living in the mountains, the odd ending made up of an entire pitch-black scene followed by the sun appearing, may appear illogical. However, the post-credits scene clears up at least some of the lingering questions.

One of the questions semi-answered was regarding the Troll’s existence altogether. Many viewers, throughout the film, may have wondered if Troll was the last survivor of his species, and while the mystery was never directly solved, the post-credits scene shows that it may not be the case. In the very first scene of the film, Nora and Tobias, her father, are seen climbing a cliff, facing a Troll lair and several of the ancient creatures hiding within the Dovre mountains.

This is again brought up in the post-credit scene, right after the massive explosion takes place on the mountain site, leaving it littered with rock debris right before the post-credits scene. After the explosion, the audience can hear a roar similar to those heard by the Troll throughout the film. This might hint that yet another Troll has woken up, thus creating the ideal scene for the subsequent film.

What will happen in the Troll sequel?

While it is impossible to predict, the post-credit scenes lead the viewers to believe that the sequel will most likely center around the awakened Troll. This can lead to yet another film about one specific harmless behemoth, or it might induce a sudden emergence of Trolls awakened by the explosion. The creatures might wish for revenge upon discovering the lair hidden in the Royal Palace, causing them to attack the capital of Norway once again. Nora will most likely be forced to engage with the ancient creatures again, but perhaps her newfound knowledge of their alleged harmless attitude will enforce an entirely new attitude toward Trolls.

The plot surrounding Tobias Tidemann’s research is also yet to be explored in depth. As the government deemed his work erroneous due to the Royal Palace’s intervention, it was never made public. His research might entail a possible in-depth disclosure of his results, as a way to honor Nora’s father.

Though Netflix is yet to confirm its plans for future Troll installments, anyone can assume the upcoming films would be equally engaging and will be emotional rollercoasters as well. Perhaps they could even bring an entirely new light into the world of ancient Norway, and the way Trolls were explored and dealt with in Norwegian folklore.

Troll is available to watch on Netflix.