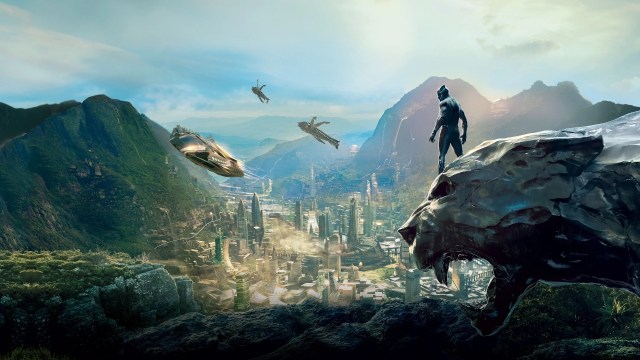 Speculation about who will be the new hero to take up the legendary mantle in Black Panther: Wakanda Forever has been growing for a long time, and an action figure might just have let the answer slip out.

Posted on Twitter, the action figure from Hot Toys shows the new Black Panther, as seen in the Wakanda Forever trailer, labeled as Shuri. It’s 1/6 scale and the figure is shown in various poses, one of which has the figure holding a spear. If this figure is anything to go by, then it looks like T’Challa’s sister is indeed the new hero.

This shouldn’t come as too much of a shock from those who’ve been following all the information that’s come out about the sequel. The aesthetic of the costume’s details points to Shuri, played by Letitia Wright. She’s the princess of Wakanda, a technological genius, and a fighter who helped protect Wakanda at the end of the first Black Panther, plenty of signs were there.

This isn’t the first time a figure has potentially spoiled the story of a major franchise. Before Star Wars: The Force Awakens was released, a leaked release of Rey with a blue lightsaber (the one that Luke Skywalker used in A New Hope and The Empire Strikes Back) was used. That’s the cost of making products for in-demand movies.

Wright reportedly suffered devastating injuries on the set of Wakanda Forever, which set the shoot back several months. Allegations grew concerning Wright’s vaccination status, and producer Nate Moore danced around the topic, stating that they didn’t ask anybody about their status and she never talked about her views either way.

There will be plenty of new characters this time around including the ruler of the underwater kingdom of Talocan Namor (Tenoch Huerto), and Riri Williams/Iron Heart (Dominique Thorne) who will be in a Disney Plus series of her own. Wakanda Forever star Mabel Caden who plays Namora is interested in a spinoff of her own, and at the rate that Disney is handing them out, it might not be out of the question.