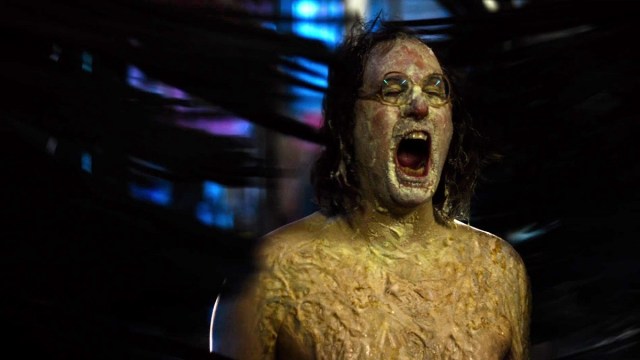 via FilmRise
Review of:

Even the staunchest of horror supporters will admit that there are certain movies you have to be in the exact frame of mind to watch, and we can most definitely place Jim Hosking’s cult favorite The Greasy Strangler right up there among the top tier.

The title is fairly self-explanatory for such an unhinged feature, with Michael St. Michael’s Ronnie competing with his son Brayden (as played by Sky Elobar) to try and win the affections of Elizabeth De Razzo’s Janet, who shows up to accompany the duo on the disco walking tour they’ve crafted to try and make a living.

The titular nightmare is the slimy subhuman serial murderer who stalks the streets at night in absolutely disgusting and depraved fashion, with The Greasy Strangler as a whole proving to be a hot-button topic of discussion among Redditors as we speak. Why? Because it’s intensely f*cked up, regularly queasy, and capable of igniting even the toughest of gag reflexes, but also kinda fun in terms of the sheer balls to the wall insanity of it all.

Most definitely not a film the entire family can gather around the television and enjoy, The Greasy Strangler is an entirely unique experience the likes of which the horror genre doesn’t deliver all that often. Whether that’s a good or a bad thing depends entirely on your personal preference, and penchant for such an aggressively disconcerting slice of bonkers cinema.

It’s either the best movie you never want to see again, or a mistake you’ll regret for the rest of your life, because The Greasy Strangler doesn’t dwell in the in-betweens.