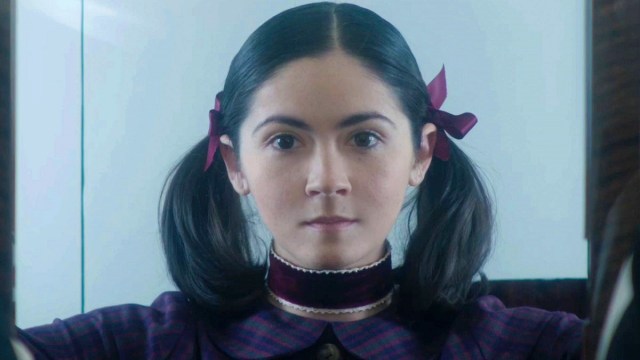 Isabelle Fuhrman is set to reprise her role as the chilling and murderous Esther in Orphan: First Kill, the prequel to the 2009 psychological horror, and is sharing just how difficult it was getting into the role 13 years later.

In a chat with Movie Web, the Orphan actress explained that so much time has passed since the original film was released that she had a hard time getting into the character of a nine-year-old. She mentioned the juxtaposition she faced having to channel an adult when she was a child, and now having to do the opposite and pretend to be a child.

“For me, a lot of the preparation for the new thing was kind of discovering a childlike quality to Esther, because I think the first time around when I did this, as a kid, I was so concerned with pretending to be an adult, and this time, I actually had to put myself in Leena’s shoes and pretend to be a kid. To find that again, I would say, is slightly therapeutic. I got to do a lot of play with the girls who were my body doubles… and really got to discover new qualities about Esther through them.”

When Fuhrman first stepped into the young killer’s shoes, she was still a child, so naturally, having to take on the role at 25 years old proved a challenge for the actress. She further revealed that she was able to fulfill the role’s requirements by paying attention to the team and mentally merging her younger self with her present age.

“I was going back and reading my old script from when I was 10, and all the notes I made when I was a kid and really kind of trying to ask myself every single day what I would have thought as a 10-year-old about this scene, rather than just the decision that I was thinking at the age I am right now. There was something clearly that I did when I was a kid that worked the first time around, and I really wanted to make sure that I married those two worlds of the Isabelle that I am today and the Isabelle that I was when I was 10.”

Orphan: First Kill will also star Julia Stiles and Rossif Sutherland in lead roles, and director William Brent Bell has already hinted at a third film in the hopes of making a worthy franchise.