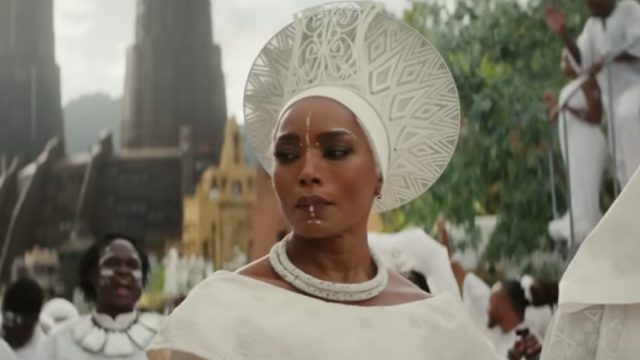 Will Black Panther: Wakanda Forever be the second film in the Marvel Cinematic Universe to win Oscars? A lot of buzz has certainly been generated for one award category, in particular: Angela Bassett’s performance as Queen Ramonda. Now, the Academy Award-nominated actor is acknowledging all of the praise she’s received for the role that many are claiming may be a shoo-in for the Best Supporting Actress category.

Bassett, whose career was launched into the mainstream with her Oscar-nominated performance as Tina Turner in the 1993 film What’s Love Got to Do With It, admitted that while she is flattered by the speculation, chasing awards is not a major motivator for her participation in superhero films. As Bassett told Variety,

“You don’t do these kinds of projects for the awards. I appreciate the buzz on it, because I know that it doesn’t really come from these big superhero movie franchises.”

Bassett went on to say she used the role of Ramonda to channel her real-life grief of the passing of Chadwick Boseman. Boseman played Ramonda’s son, King T’Challa, in 2018’s Black Panther. After Boseman’s tragic passing in 2020 following a years-long secret battle with colon cancer, Wakanda Forever director Ryan Coogler has chosen to make the film something of an homage to the actor, with the King T’Challa character also having died within the world of the film. Bassett said of her grief being channeled in the role,

“You’re experiencing it. Don’t be ashamed of it. It’s part of life. The tears you see are indicative of the love I have — or the justice I demand or want or seek or desire.”

Bassett also described traveling to Boseman’s resting place in South Carolina in 2021 with 30 people from the original film as a grounding experience that helped set the emotional tone for the film, calling it “a balm to our spirits as we continued to mourn and tried to imagine, in our own corners, what it was going to be like to try to make this movie without him.”

To this day, 2018’s Black Panther is the only MCU movie to have actually won any Oscars — for Best Costume Design, Best Original Score, and Best Production Design — having also broken ground as the first superhero movie to be nominated for Best Picture.