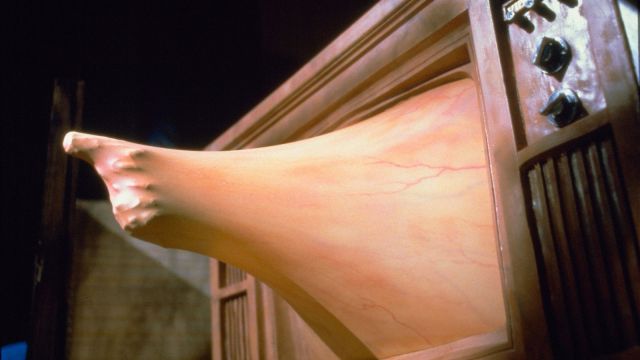 Horror fans so often point to words like “disturbing” to describe films in the genre, but there’s a whole other bodily response which feels left by the wayside — disgust.

Evolving from the same section of the brain which deals with our in-built responses to disease, sickness, and death, disgust is one of the powerful emotions you can feel. More often than not, it’s grotesque as opposed to scary which defines disgust from disturbing.

Enthusiasts, game to find movies seemingly to make them need eye bleach, are talking up the most disgusting films ever put to screen, and they’re most definitely not for the faint of heart.

Long before he made one of the greatest trilogies ever made, Peter Jackson helmed some of the most absurd and horrific films of all-time in Braindead / Dead Alive. If you’ve ever had a desire to see a cow blown up into a massive pile of guts, this is absolutely the movie for you.

David Cronenberg’s vision of horror has always been steeped in disgust. Videodrome, an absolute masterpiece of body horror, is aptly described in one comment as movie you could have sex to, but not eat dinner while watching. No single sentence has summed up Cronenberg’s filmography as well as that.

Terrifier 2 is still the talk of the horror town, with the film gaining infamy before its full release thanks to giving out branded sick bags to audiences and having several people faint during screenings. Smashing its way through the box office on a miniscule budget, it looks set to maintain a legacy with genre fanatics.

The ultimate seal of approval of your film being too disgusting is having it outright banned from cinemas. Controversial filmmaker Lars von Trier’s Antichrist manages to perfectly combine arthouse with just disgusting thanks to performances from Willem Dafoe and Charlotte Gainsbourg. Banned in France from distribution years after its original release, with the cultural minister admitting a mistake was made to allow it in the first place.

Horror lets us live out some of our greatest fears in a safer format, and the disgust angle of the genre is perhaps undervalued culturally. Blockbusters these days, perhaps too often, don’t take risks like films like these did from proper auteurs.