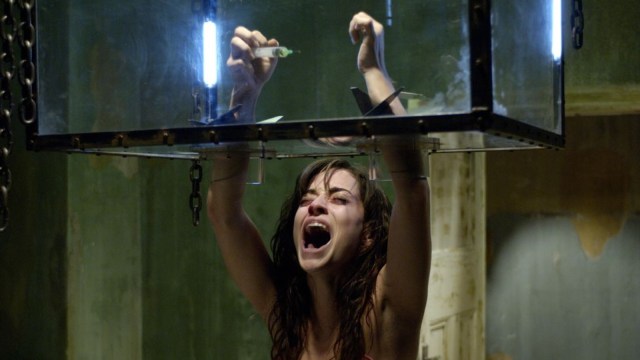 Saw, an either “love it” or “hate it” multi-million dollar franchise, exists solely because James Wan and Leigh Whannell were unable to reel in their demented imagination. For that, horror fans are eternally grateful. Starting out in October 2004, Saw debuted with rave reviews despite its unconventionally graphic nature, eventually spawning a sequel in Saw II the following year.

From then on, the long-awaited arrival of every Saw sequel became an annual holiday, each follow-up continuously releasing year after year in 2006, 2007, 2008, 2009 and 2010. After Saw 3D, the consistency vanished, forcing fans to suffer an agonizing seven-year-long hiatus before Jigsaw marked the dawning of the modern age of biological horror. Although Saw is violent and unhinged, audiences keep coming back for more. Adrenaline junkies and sadists alike delight in the most attractive feature of the franchise: the convoluted and sinister traps.

Among endless theories and rankings, the most talked-about element of the Saw franchise continues to be John Kramer’s, Amanda Young’s, Detective Hoffman’s and Jigsaw copycat’s elaborate traps — otherwise known as “games” that test the participant’s will to survive. Starting out with the first-ever Saw test, the reverse bear trap, the franchise has exceeded expectations for how unlawful and inhumane Kramer’s modus operandi can become. Let’s deep-dive into the most sickening Saw traps ever made, especially the ones that we’d never want to find ourselves experiencing.

Right away, Saw II‘s ‘needle pit’ trap emerges as one of Kramer’s most sadistic tests. For the uninitiated, Saw II sees Amanda Young (the only known survivor of Jigsaw at the time) joining John Kramer as an apprentice after viewing him as a mentor and father figure — certainly suffering from some Stockholm syndrome. Although Amanda was in on the entire scheme, it didn’t stop Franky G. Xavier’s… Xavier from tossing her head-first into a pit filled with thousands of used needles with emphasis on used, as in, unclean and certain to cause infection. While it was fascinating to learn how Shawnee Smith used prosthetic arms and fake needles to pull off the scene, it doesn’t make the pit any more enjoyable — and the whole audience collectively winced when she fell in.

Honestly, out of all the Saw films (and there’s a lot), Saw III would take the cake for the most nauseating traps. Executed by Hoffman, ‘The Rack’ sees Timothy, a hit-and-run driver, strapped to a device resembling a metal crucifix. Timothy’s arms, legs and head are suspended in movable, cylindrical contraptions that slowly rotated his limbs and causing his bones to break one by one. Saw III‘s ‘protagonist’ — a term loosely used — Jeff, learns that Timothy struck and killed his son in the aforementioned hit-and-run, thereby leaving Timothy’s life in Jeff’s hands.

Also in Saw III, the so-called ‘Classroom Trap’, which was orchestrated by Amanda Young, saw drug addict Troy regains consciousness to find himself sat in a chair in the middle of a classroom. Jigsaw explains that the bomb in front of him will explode and kill him instantly if he doesn’t remove eleven chains with connecting rings attached to different tendons all over his body. While most of us would take the easy way out and wait for the explosion, we later discover that Amanda had defied John’s teachings by making her traps inescapable — so it wouldn’t have mattered either way.

Some honorable mentions include the ‘Brazen Bull’, a device that locks its victim in a makeshift oven and burns them alive if another participant doesn’t pierce their pectorals with metal chains and hoist themselves up to a deactivation switch. Imagine placing your life in someone else’s hands? And a stranger, no less.

Despite a poor performance at the global box office, Spiral did have some memorable traps. The ‘Wax Trap’ sees Captain Garza, a homicide detective, laying flat on a table with her neck suspended above a metal blade mounted onto the table. Her face is covered in white cloth, while a wax tank continuously poured hot wax onto her face, effectively suffocating her. Garza needed to sever her spinal cord — something that none of us could ever dream of doing — to stop the flow of wax. Needless to say, she failed.

In 2021, a ninth installment in the esteemed Saw franchise, dubbed Spiral: From the Book of Saw, saw Chris Rock take on a copycat Jigsaw killer and a complete absence of the original and infamous Jigsaw killer, Tobin Bell’s John Kramer. Naturally, Spiral bombed hard at the box office, never even succeeding enough to become a sleeper hit. In April 2021, Twisted Pictures announced a sequel to Spiral, titled Saw X, which would release on October 27, 2023 with Kevin Greutert — who helmed Saw VI and Saw 3D — to direct.

Hopefully (does that sound too sinister?), Saw X will deliver on even more disturbing and unfathomable torture methods for us sickos to feed on.