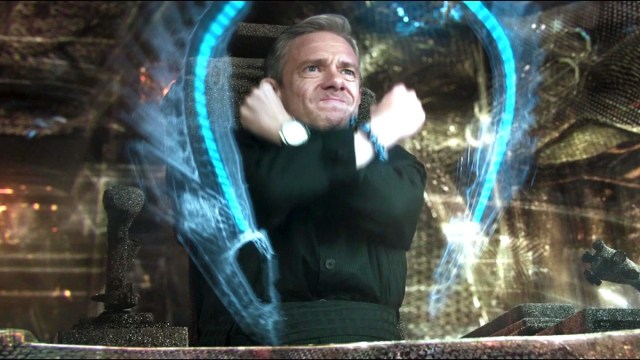 Black Panther: Wakanda Forever will bring back Martin Freeman’s Everett Ross, and, for Freeman, it is fun to be the odd man out on set.

The actor comments on his character in the piece and the broader cinematic universe in a new article published by Digital Spy. He sees Ross as a good friend to have, and, not knowing where his loyalties lie, it can be fun to watch. Being the straight man is part of the fun and you sort of know where he stands directly as a person in the very fantastical fiction world.

“I guess he’s a very useful ally to have in a country like America. He advocates for them, and I think that’s very useful for them. In those black-and-white terms, you’re not sure if he’s a goodie or a baddie. And he’s turned out to be a useful ally for [Wakanda] and I like that but he’s not touchy-feely. He’s not kind of cutesy. He’s pretty straight. But he’ll do what he can to sort of help the people he likes and loves.”

As for more details on his character, Freeman keeps his lips sealed.

While some have criticized Wright for reportedly not being vaccinated and previously buying into conspiracy theories, she apparently does a good job. Producer Kevin Feige recently says so in a new article and went as far as to state she shoulders a big burden.

Wakanda Forever hits theaters Nov. 11, and as with any Marvel film, a variety of merchandise is available and we have rounded up the best gifts here.