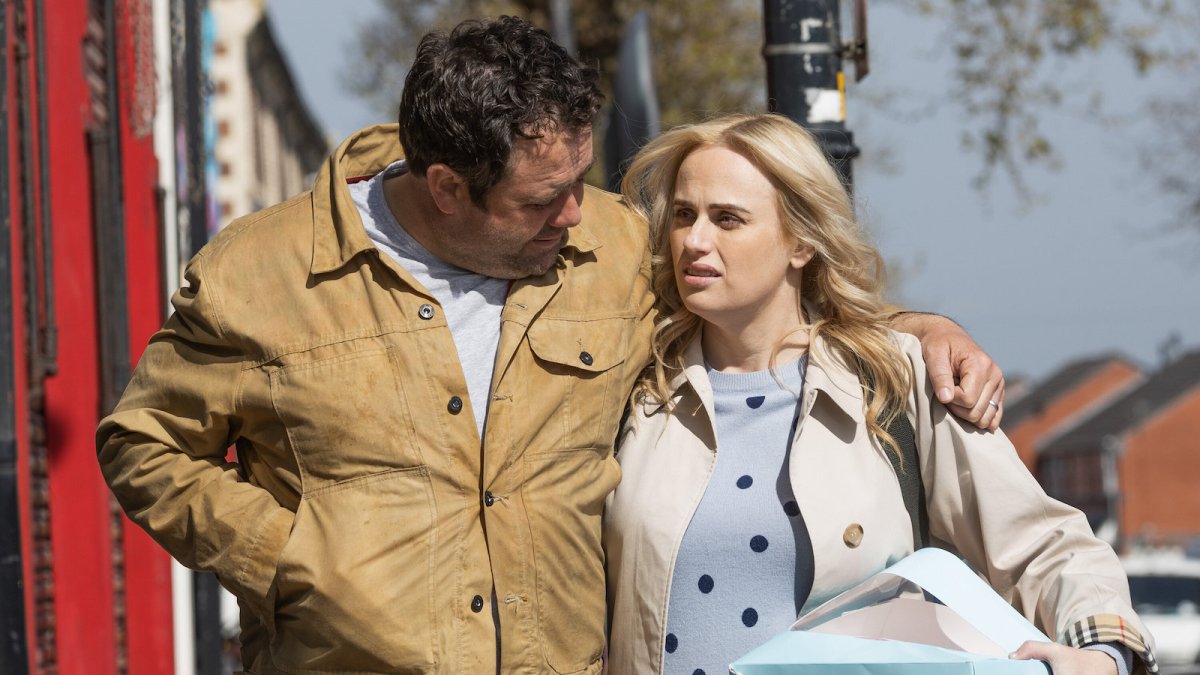 The Almond and the Seahorse, which hits selected theaters and on-demand from Dec 16th, is notable for being Rebel Wilson’s first foray into dramatic acting. A role that sees her sharing the screen with screenwriter, co-director, and producer Celyn Jones as her husband Joe.

Based on the play by Kaite O’Reilly and produced in part by Eddie Izzard, this life-affirming drama about loved ones dealing with long-term brain injury is hard-hitting stuff. Co-directed by Tom Stern (Flags Of Our Fathers) and featuring Charlotte Gainsbourg (Nymphomaniac) as Toni, this low-key character piece deals compassionately with a sensitive topic.

Sarah (Rebel Wilson) is an archaeologist who is trying to juggle professional and personal responsibilities, while her partner Joe slips away a piece at a time. He has trouble retaining memories and often forgets who and where he is – leaving Sarah reliant on various routines which safely control his day.

That Celyn Jones takes on such a complex set of behavioral traits without playing to the cheap seats is admirable. Joe is a combination of petulant chain-smoking man-child and overly attentive teenager, which Sarah has to wrangle and bargain with all the time. She makes constant phone calls reminding him to take medication, while unexpected distractions at home continually put him in jeopardy.

Toni and her partner Gwen (Trine Dyrholm) form the other part of this relationship equation, which goes to make up The Almond and the Seahorse. Gwen suffered a similar injury following a car crash and has been losing pieces of herself for over ten years. She veers between hysterical panic and docile acceptance, recalling Toni’s face periodically before asking if they have ever met.

Linking both relationships together is Doctor Falmer (Meera Syal), who continues to treat both Gwen and Joe, even though their respective partners seem to be in perpetual denial. Much of The Almond and the Seahorse deals with emotional acceptance, both in terms of letting go, but also more importantly – moving on.

Doctor Falmer is pivotal in that process and serves as the driving force for both women. That the journey they take and experiences which come to define them, bring about their own emotional epiphanies is par for the course. Bound together through shared trauma and equally affected partners, it is inevitable then that Sarah and Toni should connect.

When they do finally meet, form an emotional bond and seek comfort through togetherness, it feels like a natural progression rather than some form of dramatic coincidence. For that reason, as much as Meera Syal may well be the heart of this film, this film really belongs to Rebel Wilson and Charlotte Gainsbourg.

There is a sense that the presence of this Lars von Trier regular forces Rebel Wilson to up her game. Sarah is impassioned, committed, and dramatically compelling on screen, while the scenes she shares with Toni are both tender, passionate, and nuanced. Gone are the sidekick vibes or comedic asides which have come to shape Rebel Wilson’s career thus far. Instead, audiences are treated to a dialed-back turn from a mainstream actor that aims for honesty rather than distracting with bombast.

The Almond and the Seahorse comes from a place of self-awareness, which stems from Kaite O’Reilly’s involvement with disability in the arts. This film was never intended to make a huge splash or garner Oscar nominations for its cast.

What Celyn Jones sought to do through this adaptation with Kiate O’Reilly is highlight daily struggles in smaller communities, that might not otherwise get explored. Ultimately, that is where The Almond and the Seahorse succeeds, through some clever narrative choices and sensitive character turns. Offering audiences an insight into a world where unconditional love and eternal optimism, are often all people can cling to when it comes to dealing with severe brain trauma.

The only other alternative partners have when it comes to coping is denial. The approach offers no respite nor any rewards worth discussing here. If The Almond and the Seahorse has any failings, they come from the fact that every possibility is covered and tied things off too easily. The tidy conclusion ultimately diminishes any impact by defaulting to a chocolate box ending that may promote debate but never leaves a lasting impression.

Review: 'The Almond and the Seahorse' shows Rebel Wilson in a new light

With some solid turns from Rebel Wilson and Charlotte Gainsbourg, The Almond and the Seahorse explores the idea of living with long term brain trauma.