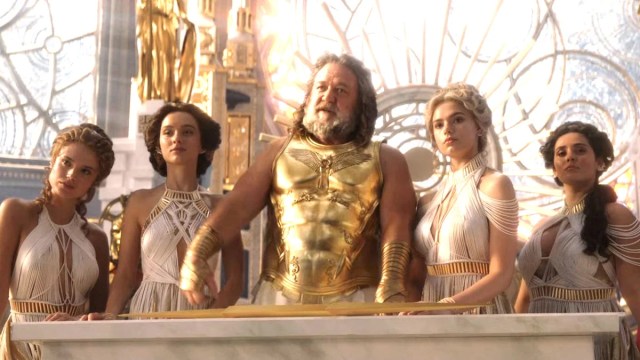 Now that Thor: Love and Thunder is finally playing in theaters, the latest chapter in the Marvel Cinematic Universe is guaranteed to take over the cultural conversation and dominate the social media discourse for the foreseeable future.

Reviews haven’t been overly enthusiastic, which is disappointing for those who were expecting Chris Hemsworth’s solo outing to deliver on the expectations placed upon it by the fantastic Ragnarok, and there are already a myriad of differing opinions being tossed around online as fans debate, dissect, and discuss the Odison’s fourth standalone blockbuster.

As soon as the first trailer dropped, it was clear that Russell Crowe’s Zeus was going to be a potential point of contention, especially when his… questionable… accent was unveiled. To the shock of nobody, then, the orgy-loving don of Omnipotent City has been splitting opinion straight down the middle.

Not to go into spoiler territory, but with Moon Knight, Eternals, and now Love and Thunder dabbling in deities, Celestials, and other cosmic beings, you get the distinct impression that the pantheon of the gods is set to become an integral part of the mythology moving forward.

That means Crowe’s House of Gucci accent could be the template by which any future characters rooted in Greek lore adhere to, which is guaranteed to cause concern and excitement in equal measure. On the plus side, Crowe is clearly having an absolute blast in Thor: Love and Thunder, so much so that he’d double-dipping into the Marvel universe by appearing in next year’s Kraven the Hunter, too.