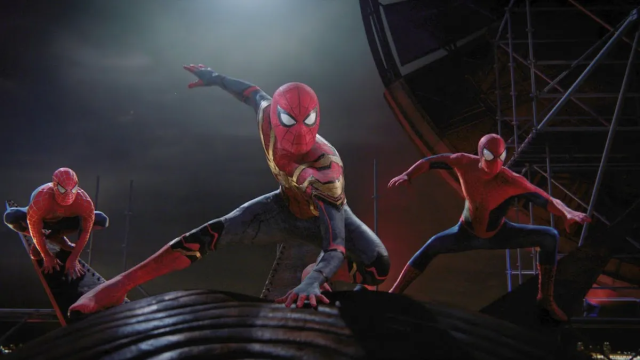 Great news for fans of the film Spider-Man: No Way Home today. Sony Pictures’ re-release of the film, officially called The More Fun Stuff Version, will have 11 new minutes of footage.

The movie is swinging its way back into theaters after pulling in a staggering $1.9 billion last time around, almost beating out Avatar as the highest grossing film of all time. Fandango announced the news in a tweet.

“THIS JUST IN: Fandango can exclusively reveal that the re-release of #SpiderManNoWayHome will feature 11 minutes of new footage when it arrives in theaters on September 2. Tickets go on sale this Tuesday. What an AMAZING way to end your summer!” the tweet read.

The re release was originally announced back in June, and at its core it’s simply an extended cut of the film. It’s also a celebration of sorts highlighting 60 years of Spider-Man in the comics and 20 years of Spidey on the silver screen.

No Way Home is the most successful Spider-Man film to date and was a sensation in no small part to its multiverse-oriented timeline and the return of the two actors who played previous iterations of the character – Tobey Maguire and Andrew Garfield.

In an interview about the film in February, Spider-Man actor Tom Holland revealed that one of the Spider Men was wearing a prosthesis on his butt.

“I’ll give you a spoiler, and I’m not going to tell you who, but one of us has a fake ass in their suit,” Holland said. “You can figure out that for yourselves. I remember being on set and being like ‘Wow! Oh, hang on a minute, now that’s not real.’”

You can figure it out for yourself when the movie returns to theaters on Sept. 2. Tickets go on sale August 22.