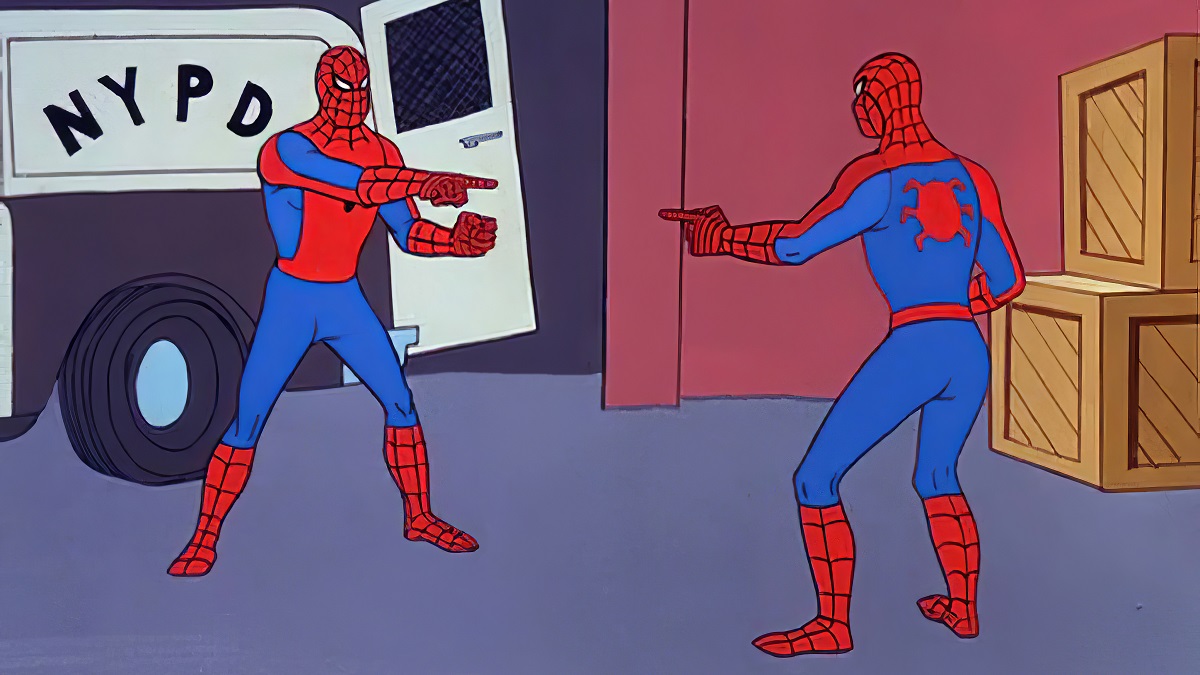 As soon as Tobey Maguire and Andrew Garfield were rumored to be coming back for Spider-Man: No Way Home, Marvel fans were betting that the movie would feature a nod to an iconic meme, based on a screenshot from the 60s Spidey animated series involving a pair of webheads pointing at each other. As it happened, the conclusion to the Homecoming trilogy ended up recreating the meme twice.

The more obvious homage to the meme occurs during the climactic Statue of Liberty scene, with Maguire, Garfield, and Tom Holland pointing at each other in a circle. A less obvious wink at it occurred earlier in the film, though, when the three wall-crawlers are working in the Midtown High lab. When Ned calls Peter’s name, all three Peters respond and point at each other in confusion.

It turns out that this moment is all thanks to Garfield himself. While speaking on the Happy Sad Confused podcast, the Amazing Spider-Man star recalled that it initially took a while to squeeze a homage to the meme in there somewhere.

“Oh, so we were trying to figure out the pointing thing, like how we were going to do the pointing meme in a way – it took us a while – it kind of happened naturally on that scaffolding scene with Peter 1, Peter 2, Peter 3, like all that.”

The other memeable moment then came when director Jon Watts and the three Spideys were trying to work out the logistics of the lab scene, leading Garfield to get a great idea.

“I remember having a lightning bolt and running into set and telling [director] Jon [Watts], ‘I got it, I got it. ‘Cause there’s this moment where Jacob is like, ‘Hey Peter?’ and we all go, ‘Yeah?’ But in the script, it was like, that was that. We all go ‘Yeah?’ and in the script, my Peter says, ‘This isn’t going to get old at all,’ like something kind of sardonic – which felt kinda undercutting and not quite right for the moment because it’s cute.

It’s actually kinda cute. So then we were thinking I could say, ‘Aw, this is adorable. We’re so adorable. God, we’re cute.’ Something like that. But then I was like, no, this is the moment where we get to go, ‘Do you mean me?’ Jon was like, ‘That’s it. That’s it. Done.’ I was so happy that worked.”

It’s becoming clearer and clearer that doing No Way Home was definitely much more than just a payday for Andrew Garfield. Now he’s out there giving spoiler interviews, it’s evident he was so passionate about his return to the Marvel universe, and had a lot of say in how his Peter was depicted, not to mention the ways his character grew across the movie. What’s more, the star also improvised an, dare we say, amazing bonding moment between the three Spideys. It’s no wonder he’s open to coming back again.