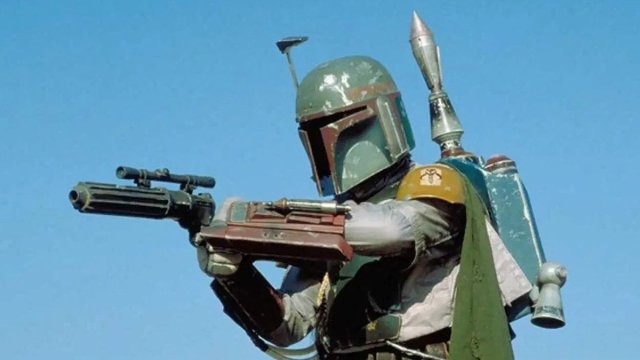 In a galaxy far, far away there lived a bounty hunter who had almost no lines in the Star Wars original trilogy, yet became one of the most beloved characters in the entire franchise. Fans are now wondering: how did they get here?

Introduced in The Empire Strikes Back as one of the zany goons hired by Darth Vader to track down members of the rebellion, Boba Fett became synonymous with the franchise. Vader uttering the line “no disintegrations”, alongside a jetpack and sand green helmet set fans off, but now people aren’t sure why.

Posted onto the Star Wars subreddit and picking up plenty of traction is a discussion on why the clone bounty hunter reached the heights of popularity that he did.

There’s a simple and obvious answer, that harkens back to aesthetics which could explain his popularity out of nowhere: he looks kinda cool. A jetpack is cool, obviously, but is that really enough?

Others have said it is related to one of his very few lines of dialogue, in which he’s confident enough to stand up to Vader about his bounty on Han Solo. Oh yeah, and toy sales were huge.

There’s a whole documentary on Disney Plus uncovering the mystery of his fandom, with Under the Helmet putting forward several theories. That documentary does very much imply it was down to a massive toys sale push from before Empire came out.

There’s a popular Star Wars fan theory around that famous “no disintegrations” line from Vader to Fett, with many believing that the bounty hunter was the one who burnt Beru and Owen Lars to a charred, crisp corpse in A New Hope. The one problem with that theory is why would Vader ever trust him again for a big job? Was it a “jobs for the boys situation”?

Regardless, Boba did get his return in The Mandalorian, before getting a spin-off series The Book of Boba Fett, both of which are available to stream on Disney Plus.