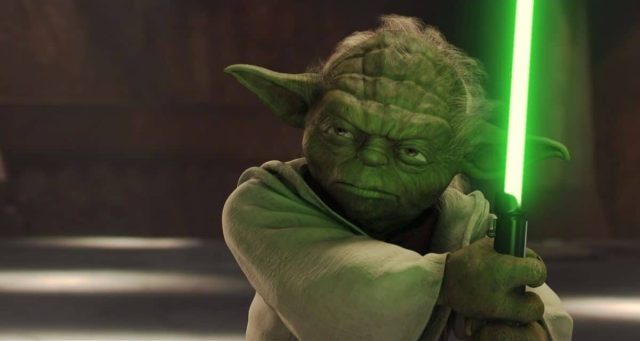 Fans have found yet another opportunity to praise the epic lightsaber duel between Yoda and Count Dooku from Attack of the Clones.

“A question for everyone who watched AOTC in 2002,” wrote Redditor upvoter158 to kick off the conversation, “what was your reaction when you saw Yoda bring out his lightsaber for the first time?”

“The theater went fucking apeshit,” Dougdoesnt replied. “Hooting and hollering and throwing popcorn,” they continued. “They LOVED it.”

ImwRight87 concurred before describing the scene in the movie and in the theater. “Absolute silence when he hobbled in, then he dropped his cane and used the force to draw his lightsaber and the whole theater was in a total uproar.”

Similar recollections abound, with cricket9818 writing “Crowd went fucking nuts,” LTBama mentioning “I couldn’t wait to see Yoda fight and it exceeded my expectations,” and ItsKensterrr adorably remembering “This moment was one of the few moments in my life that I can truly say my dad was like a kid again . . . when we left the theater he was still going on about how badly he’d wanted to see just how strong Yoda is for the past two decades.”

“I loved seeing this as a kid,” dlandis07 stated. They then described the shock they felt when they realized that certain people not only hated Yoda’s moves but the very idea of him using a lightsaber.

Although some people mock the duel, especially Yoda’s “cartoonish” and “unnecessary” CGI flips and spins, that clearly wasn’t the reaction 20 years ago when fans saw the ancient, revered Jedi master go into combat for the first time.