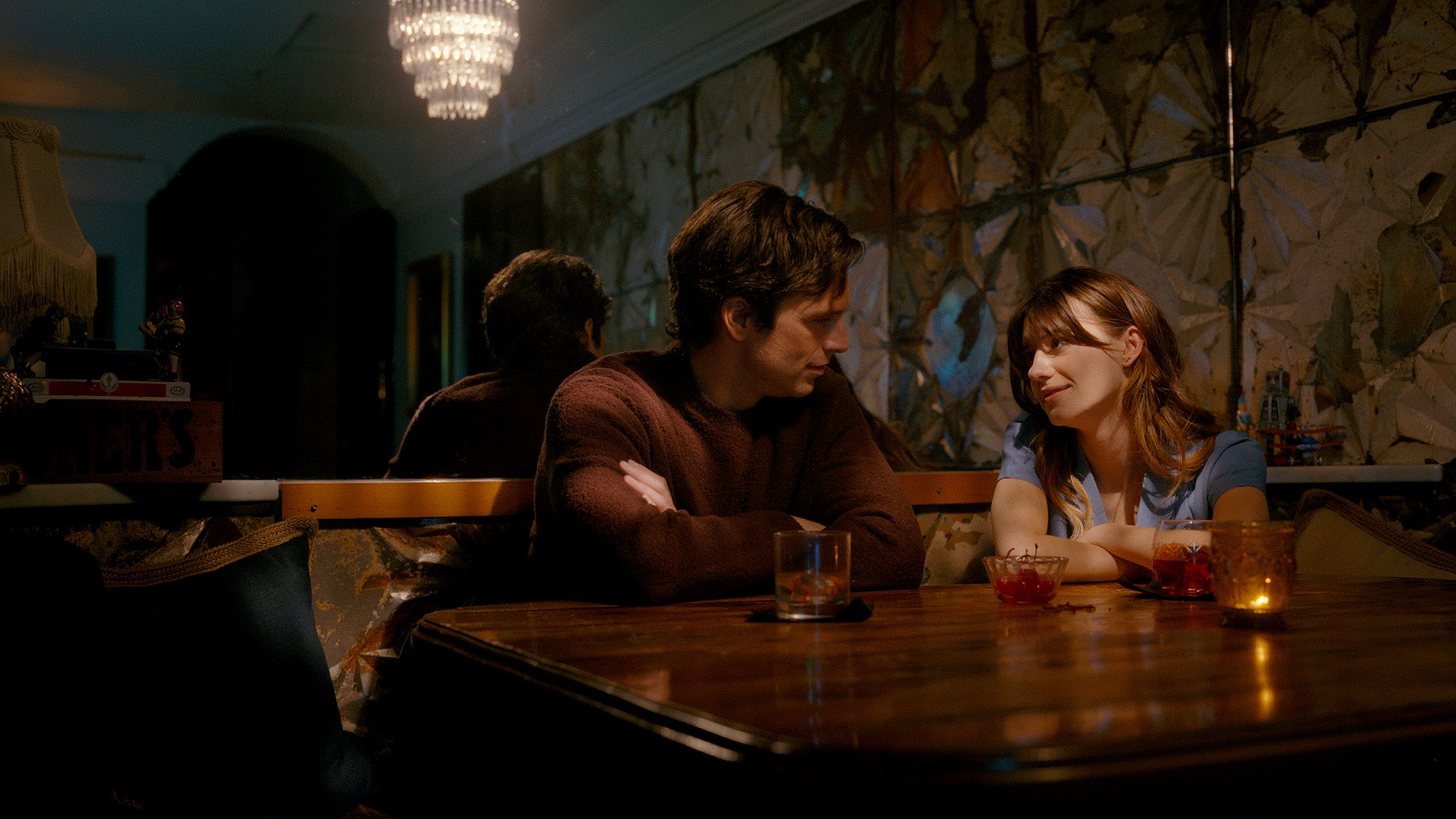 Guilty pleasures rarely come more deviant than Mimi Cave’s Fresh, which takes Sebastian Stan and makes him bury Bucky Barnes forever. In his place, we have Steve, who has a large bank balance, a suave bachelor pad and appetites which require one special woman. Noa turns out to be precisely what he is looking for in his ladies, being both disinterested, indifferent and savagely dismissive of men.

From their first encounter, Stan sketches Steve as a diffident and self-effacing older guy unlucky in love, but forever optimistic. As romantic clichés pile up and slow dancing melds with mood lighting, on-screen chemistry works hard to wrong-foot the audience. Daisy Edgar-Jones melts in the presence of her leading man, while Stan employs ample amounts of charisma in the process. To complement the considered performances, writer Lauryn Kahn peppers their flirtations with some razor-sharp dialogue, that refines the mood and grounds things further.

What director Cave manages above all else is to draw her audience in by offering few pointers and tempting viewers with sensual close-ups. Ultimately, though, the honeymoon concludes when the morning brings unexpected invitations. As a weekend retreat is agreed upon, a best friend informed and bags packed, there is a sense that something nasty lies in wait.

In deploying the Kubrick calling card of an aerial tracking shot over isolated treetops, Fresh finally decides to slip into some big boy pants. Having played footsie under the table for thirty minutes of flirtation, this is when the film goes native and lets its devil out to play. A moment which also happens to coincide with the opening credits going full-on acid flashback, with Performance levels of sixties psychedelia.

From that point on it’s all eighties chart hits and surgical procedures, as human thighs in the dumbwaiter and torso tagged body parts are consumed or shipped off via UPS. With Stan sliding around in his socks and shaving human flesh into vacuum bags, there is a distinct American Psycho vibe in the air. This might not be charging up the corridor brandishing a chainsaw, but Fresh definitely dives into deviant territory, as Stan’s character clearly revels in the moment.

Elsewhere, Edgar-Jones puts in some solid work alongside Andrea Bang’s Penny, as they negotiate their new existence as a takeaway meal. Clean, modernist lines and precisely lit works of art give Fresh a cultured edge, even if the cannibalism might threaten to take that away. However, with twenty minutes left something unfortunate happens, as invention gives way to convention, which in turn digresses into formula.

Although the exchanges between Steve and Noa remain interesting, plot choices drift towards the mundane, and slowly all that good work is undone. Similarly, moments with Charlotte Le Bon’s Ann offer potential, but ultimately feel wasted. Elsewhere, Noa proves to be more resourceful than a man who has been kidnapping people for years, allowing the inevitable coincidences to pile up. What started out as seriously subtle and dangerously deviant, devolves into a film which is little more than average. However, a special mention should go out to Jojo T.Gibbs as Molly, who provides some essential comedic support, even when things go south.

Audiences may well get the impression that there is a better version of Fresh somewhere lost in script revisions, as financiers and money men got nervous and demanded change. To go from something so diversely inventive, only for it to end up having all that vigor removed, is disappointing.  Adam MacKay is listed as one of the producers on Fresh, which should have been encouraging, but for some reason on this occasion, things failed to pan out. However, those criticisms aside, there is still much to enjoy here, as subversive casting and savvy observations on dating provide some redeeming qualities.

In terms of cinematography, Pawel Pogorzelski’s unsettling use of close-ups and distinctive framing adds another redeeming element, which manages to elevate a mediocre finale. Composer Alex Somers also offers up some subtle musical accompaniment, giving Fresh an audible shot in the arm that works to reinforce those visuals. Something that in retrospect will make audiences pause for thought if only to consider what might have been had Fresh retained the courage of its convictions. After all, had that happened, then Fresh may well have morphed into an ideal companion piece to Emerald Fennell’s Promising Young Woman.