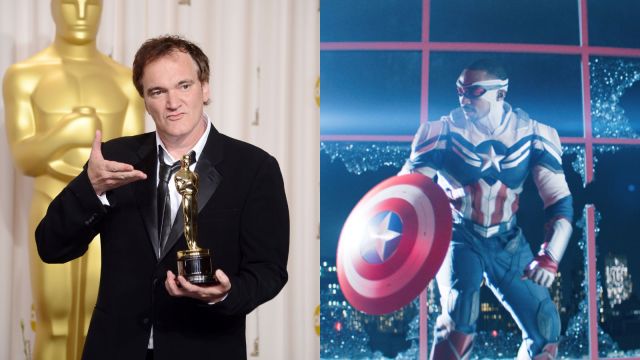 Debate rages online following Quentin Tarantino’s comments on the Marvel Cinematic Universe and its wave of movie stars vs. characters, with an old interview of Anthony Mackie being vital to Tarantino’s defenders.

Tarantino criticized Marvel for having not having “movie stars” in their films, but instead forcing actors into typecasting themselves as their character, and essentially nothing more. While there’s a certain truth to the actors becoming typecast as action heroes, the comments didn’t go down particularly well with some, especially Simu Liu.

The discourse has gone from minor scuffle to warzone after Liu dismissed Tarantino’s criticism as gatekeeping and partly based in white privilege, however Mackie may just disagree with his Marvel co-star. During the 2018 London Comic-Con, he explained how he believed in the death of the movie star and how superhero movies tie into it.

“There are no movie stars anymore. Like Anthony Mackie isn’t a movie star – the Falcon is a movie star. And that’s what’s weird. It used to be with Tom Cruise, Will Smith, and Stallone, and Schwarzenegger. When you went to the movie, you went to see the Stallone movie. You went to go see the Schwarzenegger movie. Now you go see X-Men. So the evolution of the superhero has meant the death of the movie star. And that’s the fear now. Because you’re now making movies for 16 year-olds and China. And that’s it. Your favorite movies growing up wouldn’t get made today. Goonies, Halloween, The Thing, wouldn’t get made today.”

Mackie certainly has a point around films being far more based around franchise appeal than the star power, but it isn’t quite as simple. People still talk about seeing movies because of its cast, but more so now in subgenres like horror. The death of the movie star can also be tied into the rise of directors.

Audiences go to see a Christopher Nolan movie, a Quentin Tarantino movie, or a new Ari Aster movie. There’s still immense “movie star” vibes emanating less so in male stars, but instead hardcore following of actresses. Don’t Worry Darling is of interest to a lot of people because of Florence Pugh, and nearly anything with Cate Blanchett is marketed around her presence.

Mackie will return as Captain America in upcoming fourquel New World Order, which is set to release May 2024.