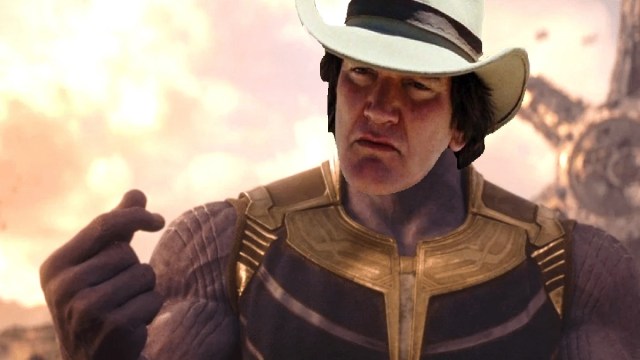 via Marvel Studios/Sony
Review of:

Just like Martin Scorsese, Quentin Tarantino is one of the most consistently acclaimed and revered filmmakers in the industry, and they’d have plenty to talk about should the pair ever get together with the sole intention of trashing the Marvel Cinematic Universe.

Scorsese hasn’t been shy in voicing his disdain for the world of superhero cinema, and as a result any high-profile star or director is asked for their own personal opinion whenever they’re promoting anything, but Tarantino has never exactly been famed for the amount of f*cks he’s been known to give.

Fresh from taking a pounding on social media for not wanting to be “a hired hand,” Hollywood’s premiere foot fetishist went one step further during a recent appearance on the 2 Bears, 1 Cave podcast, when he basically insulted the majority of the MCU’s established roster by claiming they aren’t really movie stars at all.

“Part of the Marvel-ization of Hollywood is…you have all these actors who have become famous playing these characters. But they’re not movie stars. Right? Captain America is the star. Or Thor is the star. I mean, I’m not the first person to say that. I think that’s been said a zillion times…but it’s like, you know, it’s these franchise characters that become a star.”

Needless to say, Tarantino’s disparaging comments did not go down to well among the Marvel-supporting masses.

While he does have a point in claiming the MCU has given a leg-up to certain stars, it’s not exactly a franchise-wide sentiment that holds much water, especially when his longtime friend and regular collaborator Samuel L. Jackson was one of the first names on board. Then there’s Robert Downey Jr., Scarlett Johansson, Mark Ruffalo, and many more besides, so you understand why fans are pissed he’s basically trashing anyone who’s ever suited up.