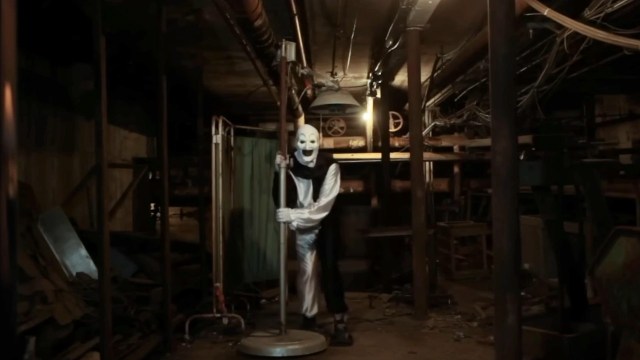 Over the years, the massive horror genre has been infamously represented by a band of destructive villains — namely, Halloween’s Michael Myers, Friday the 13th’s Jason Voorhees, A Nightmare on Elm Street’s Freddy Krueger, and A Texas Chainsaw Massacre’s Leatherface. But genre diehards are undoubtedly pleased to rally around a present-day, fear-inducing 21st Century horror icon — and that would be Terrifier’s Art the Clown.

Over on the always active r/horror subreddit, user u/bgaesop ignited a spark amongst fellow Redditors by sharing a wordy deep-dive into the significance of Terrifier’s main antagonist, touching upon points about Art’s undeniable humor, “evil clown” persona, and the villain’s undying commitment to being a bizarre, over-the-top performer.

Unsurprisingly, a large portion of unapologetic gorehounds quickly flooded the comment section, with the majority praising Art for his masterful body language and performance — including his comedic reactions and the all-around sheer terror that he brings to the table.

For some background, Art the Clown made several appearances as the forefront of Damien Leone’s earlier films. However, it was the immortal figure’s presence in both Terrifier (2016) and Terrifier 2 (2022) that solidified Art as a genuine horror icon. So much so, that Leone’s blood-stained sequel was recently submitted to the 2023 Oscars. The act was done so jokingly, of course, but the thought alone of Art on stage is enough to make our skin crawl.

And if the overwhelming response of fear from fans wasn’t glaring enough, then it’s certainly become evident that Art the Clown is a box office draw, with the horror flick grossing an impressive $10 million against a budget worth far less. With that said, one can only assume that Leone will bring Art back for a third gorefest, seeing as horror fans simply cannot get enough of the mime master.

For now, Terrifier 2 is available to stream on Screambox.