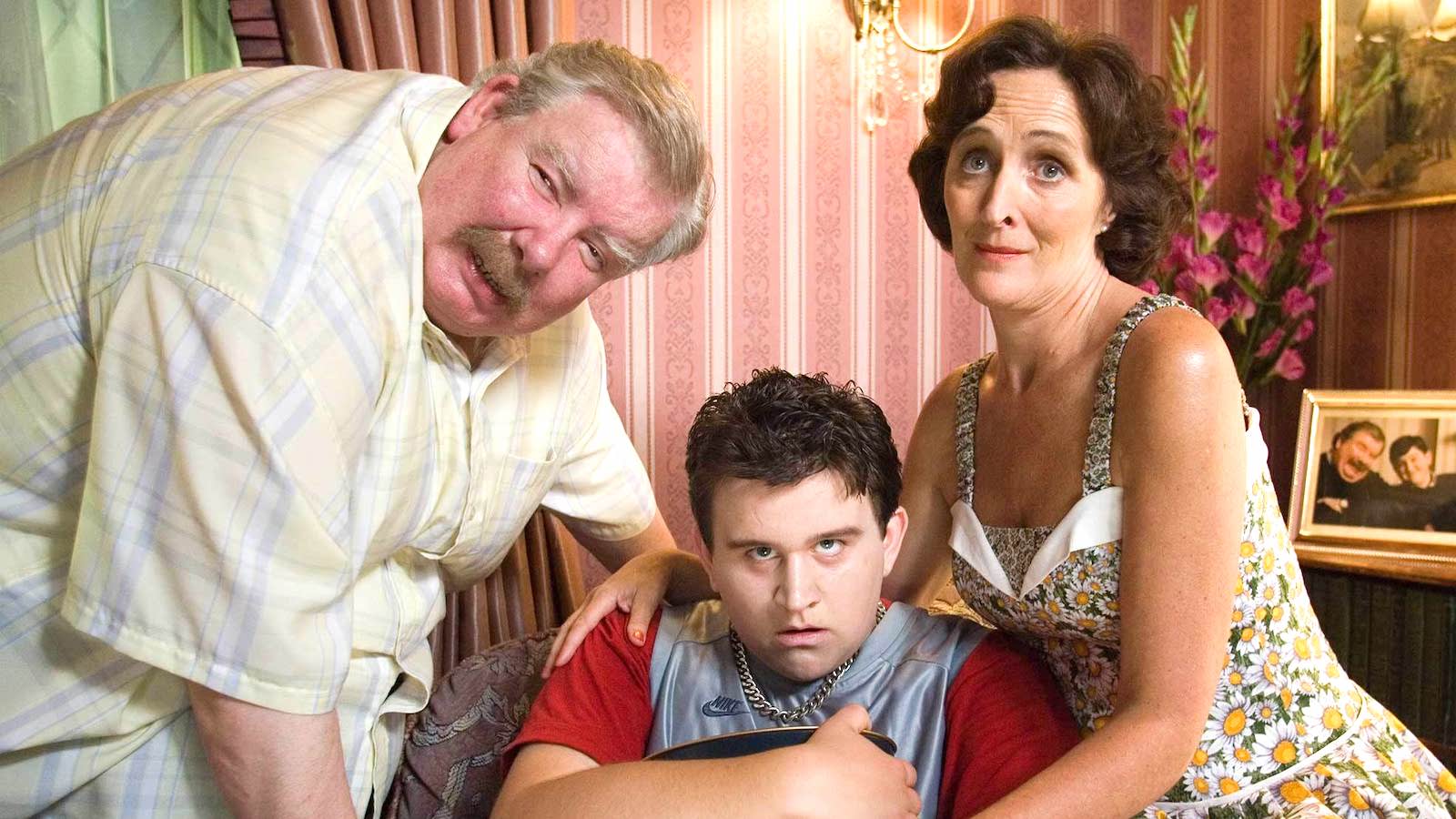 In the Wizarding World of Harry Potter, a Muggle is defined as a non-magical person. In an effort to avoid war after witches and wizards faced persecution in the Medieval period, they now live amongst Muggles in secret under a law called the International Statute of Wizarding Secrecy. Keeping this huge secret is the job of each country’s Ministry of Magic and is not an easy task. Numerous and complex concealment charms ⏤ like Hogwarts appearing to Muggles as ruins with a sign to keep out ⏤ make this secrecy possible.

Not all witches and wizards are happy with living underground, however. Dark wizard Gellert Grindelwald terrorized the Wizarding World in an attempt to overthrow the secrecy statue, dreaming of a society in which wizards and witches would rule over Muggles. On top of this sense of rebellion from a pocket of the community, the secret of magic is not absolute. Wizards and witches often fall in love with Muggles and let them in on the secret. Children born from Muggles can have magical abilities. The Prime Minister of England is told of the Wizarding World on the day he moves into 10 Downing Street by the Minister of Magic. Even unconsciously, Muggles play an important role in the Wizarding World at large.

While it’s easy to think that Muggles’ lack of magical ability means that they bear no actual power, the Harry Potter books and films have proven that this is not always the case. Here are 10 Muggles in J. K. Rowling’s world who have plenty of power in their own ways.

A common theme in the Harry Potter series is the power of family love. In Tom Riddle Sr., we are given an example of what happens when this love is not present. Riddle Sr. was father to Tom Marvolo Riddle, who of course would go on to become Lord Voldemort. He was well-to-do, arrogant, handsome, and caught the attention of witch Merope Gaunt, who magically coerced Riddle Sr. into marriage and fatherhood. When he was released from this magical influence, he abandoned Gaunt and their unborn son.

For years, Lord Voldemort believed that his Muggle father had abandoned him because he found out that his mother was a witch, and this belief fueled his hatred of Muggles. He resented his half-blood status and never understood the power of a parent’s love for their child, which would ultimately lead to his undoing. Similarly, Tom Riddle Sr. would never know the powerful influence he had on his son, but even if he had, there’s no way of knowing if things would have turned out differently.

Although only fragments of Tobias Snape are seen in the Harry Potter series, his legacy ⏤ like that of Tom Riddle Sr. ⏤ lives on in his son, Severus. Tobias was an abusive and neglectful father toward Severus, and this childhood trauma shaped Severus’ view of Muggles early on. Severus resented his Muggle father but also found solace in his friendship with Muggle-born Lily Evans (later Lily Potter). Severus truly loved her, but because of Tobias’ treatment, he went on to join the Death Eaters, something he may never have done had he experienced a bit more love in his life. His love for Lily is what ultimately brought him back to the light and ultimately made him a pivotal figure in Harry’s life.

If there was an award for the worst aunt and uncle in the world, Vernon and Petunia Dursley would definitely take the cake. As Professor McGonagall says in Harry Potter and the Sorcerer’s Stone, “They’re the worst sort of Muggles imaginable.” They do, however, play an important protective role in Harry’s life. While under their roof, Harry was safe from Lord Volemort because of powerful ancient magic called the Bond of Blood. Because Harry’s mother Lily sacrificed herself to save Harry, her love protects him. This protection continues after another blood relative, in this case Lily’s sister Petunia, takes in the person who was saved (Harry) as their own. As long as Harry called Privet Drive home, Lord Voldemort could not touch him there. This made the Dursleys a bit more powerful than they even realized and might have been the only thing that kept them alive once Voldemort returned to power.

With parents like Vernon and Petunia, one cannot help but feel a bit sorry for Dudley Dursley. He didn’t really stand a chance at being anything other than a spoiled brat. In the end, Dudley breaks from his family’s cruel treatment of Harry. When the Dursleys are leaving Privet Drive for safety reasons, he tells Harry that he didn’t think Harry was a waste of space and they shake hands. This might not seem like the best compliment ever given, but it’s a big deal for this particular Muggle, marking a powerful change in his character and showing us a refreshing new side to someone who, up to that point, we thought we had completely figured out.

Arabella Doreen Figg is technically a Squib, but she’s included on this list because of her unsung heroism in the Harry Potter universe. She disguised herself and lived as a Muggle for many years so she could keep an eye on Harry and report back to Dumbledore. She is so dedicated to her mission that she made herself appear in every way a Muggle that the Dursleys would approve of, often inviting Harry over to look at pictures of her cats (knowing that the Dursleys would not let Harry do anything he actually enjoyed).

When Dudley and Harry are attacked by dementors near Privet Drive, it’s Mrs. Figg who makes sure that Dumbledore is informed about the no-good Mundungus Fletcher, who abandoned his post. She also bravely testified at Harry’s trial before the Wizengamot for using magic as an underage wizard. She could have let her Squib status make her bitter, but instead she works for the good of the Wizarding World.

The Grangers are an example of the power of supportive and loving parents. Largely because of this, their daughter Hermione is a most remarkable witch. Even though as dentists they might not fully understand their daughter or her magical abilities, they never hold her back. Instead, they do everything in their power to make sure she has the tools she needs to succeed, even helping her shop for school supplies in Diagon Alley. One of the more heartbreaking moments in the series comes when, in an effort to protect her parents from the impending wizarding war, Hermione modifies their memories, erasing herself from their minds to keep them safe from harm.

As stated earlier, the Prime Minister is one of the Muggles who is legally allowed to know about the Wizarding World, and knowledge is power. He probably wishes he didn’t know, which makes sense given that the only time he hears from the Minister of Magic is when something bad has happened ⏤ like the time that deranged criminal and murderer Sirius Black escaped from Azkaban. Or the time there was a mass breakout from Azkaban. Or the time Lord Voldemort returned. The Prime Minister must think nothing good ever happens in the Wizarding World, but his knowledge of its existence makes him very powerful indeed, even if that power would do little should the Muggles ever find themselves on the receiving end of the Wizarding World’s wrath.

Frank Bryce was the gardener for the wealthy Riddle family. When Lord Voldemort returned to kill his father, Tom Riddle Sr., and his grandparents, Bryce was wrongly arrested for the murders. Bryce was then released, but later down the line would also be murdered by Lord Voldemort. He got his revenge by helping Harry escape Voldemort through Priori Incantatem. This occurs when two wands with the same core duel. If one of the wands has performed the killing curse, an echo of the person killed will appear. Bryce’s power was realized in death.

Mrs. Cole is the head of the orphanage that Tom Riddle lived in before he is accepted into Hogwarts. When Professor Dumbledore goes to meet Tom, she is protective and skeptical of him even though Tom is not her favorite charge. Once she feels more confident with Dumbledore, she tells him of Tom’s cruel bullying nature. Her powers are her honesty, a caring nature, and her appreciation of a good gin.

These Muggles’ power lies in their tattle-telling. Baylis and Fleet could have minded their own business that day and not said anything about the flying Ford Anglia they saw, but where’s the glory in that? Because of these Muggles’ big mouths, Harry, Ron, and Arthur Weasley got into trouble, specifically with a one Molly Weasley. The car does later save Harry and Ron from Aragog and his family, so maybe it was worth it in the end, but we ultimately wish these Muggles had stayed quiet and kept Ron out of trouble (as amusing as the Howler he receives from his mother is).

No man is an island. Muggles and the Wizarding World continue to live in relative harmony with one another, both benefiting from the other ⏤ even if one side is, for the most part, blissfully unaware of the other.