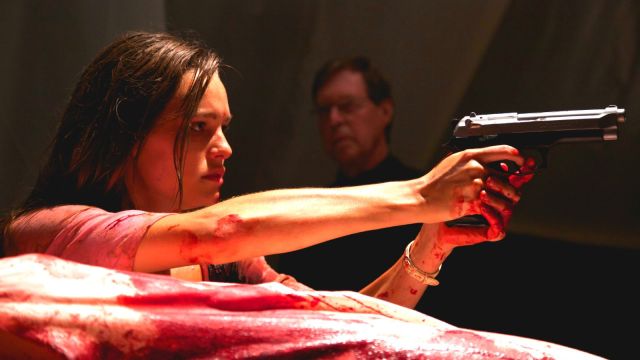 Nothing moves as fast as the discourse on horror movies, with yet another previously adored film falling down the audience cracks into the territory of being “garbage”.

No genre sees more remakes, and unnecessary ones at that, than horror. More often than not, it’s also an American remake of a previously excellent foreign film. While 2015’s Martyrs is sometimes praised as being one of the best-ever foreign remakes, not everyone can be swayed to think of it as anything above “garbage”.

Remaking the French-Canadian film which was released just seven years prior was a contentious move, and it’s still not dying down in the discourse as a hot topic.

Taking the same premise as the original and adding almost nothing of detail, it sees a young girl escape a building she’s been held captive in for years only for the trauma to stay with her for years after. Her experiences lead her to become a monster in her own right, but without the subtlety or nuance of its Canadian counterpart.

If you’re shocked by an American remake missing the point of an excellent film with layers to its horror, you must be new to these parts. The 2008 original’s crux comes down to violence and its relationship to the human psyche and healing. Not too dissimilar to the message of A Clockwork Orange, it explores a slippery slope and uncomfortable nature in our enjoyment of violence.

So, obviously, in the remake, you completely ignore violence as a theme and make it almost joyless. Perhaps the cultural taboo is just too strong to be translated from across the Atlantic, or even just the border to the north.

Pascal Laugier who helmed the 2008 film dubbed it a “junk film”, saying he could only watch 20 minutes before turning it off. The worst part is due to contractual shenanigans, he didn’t even get paid for the remake. “They saw my movie and then turned it into something completely uninteresting,” he told Filmstarts.

If you’re a glutton for remake punishment, 2015’s Martyrs is available to rent from YouTube, Amazon Video, and Google Play. For those who want to see a good horror, 2008’s original is available on the same platforms.