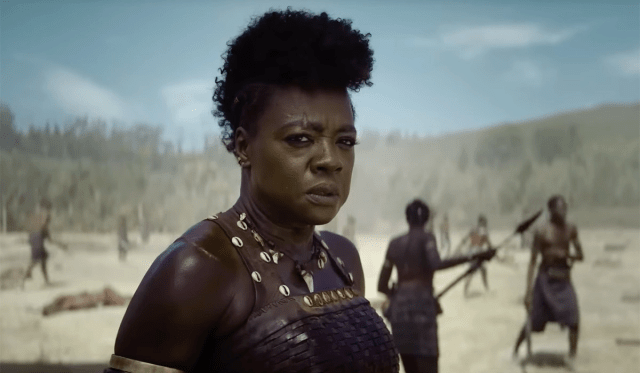 Those of you familiar with the Marvel Cinematic Universe (and maybe even those of you who aren’t) are almost certainly familiar with the Dora Milaje, the all-female, spear-wielding military brigade loyal to the kingdom of Wakanda. Led by the tenacious general Okoye (played by Danai Gurira), the Dora Milaje have been responsible for some of the MCU’s most intense fight scenes to date.

But the real-life inspiration for Wakanda’s premier military force is an enrapturing force all its own, and they’ve finally found their way onto the big screen; The Woman King, starring Viola Davis, is currently laying siege to the box office as a rousing historical action film centered on the Agojie, the all-female warrior unit that served the African kingdom of Dahomey (located in present-day Benin).

And despite the Dora Milaje’s inspirational ties to the historical Agojie, their modus operandi could not have been more different, according to The Woman King fight choreographer Jénel Stevens, who also worked on the MCU’s Black Panther film as a stunt coordinator.

In an interview with ComicBook.com, Stevens broke down the differences between either group’s fighting style, noting that where the Dora Milaje fought with a performative grace bordering on spectacle (as would be appropriate in MCU fight scenes), the Agojie focused much more on killing as efficiently and quickly as possible, which is reflected in the choreography of the film.

“And in [Black Panther] it was more twirly and flowery and visually appealing. In The Woman King, it was supposed to be more functional, more straight to the point, killing somebody else. So there was no real fantasy to it. And we used the basic striking patterns that, for me personally, I come from a Koli background, so that was a part of the system that we used to teach them these weapons for the Agojie.”

She went on to note that choreographing for a historical group instead of a fictional group and having noticeably fewer fantastical elements to it, as a result, made for an incredibly rewarding experience.

“This was a totally different approach and it meant something deeper for me to be a part of it. It was rooted in history, like I said, 1800s these women actually existed, and to embody that was unprecedented for me.”