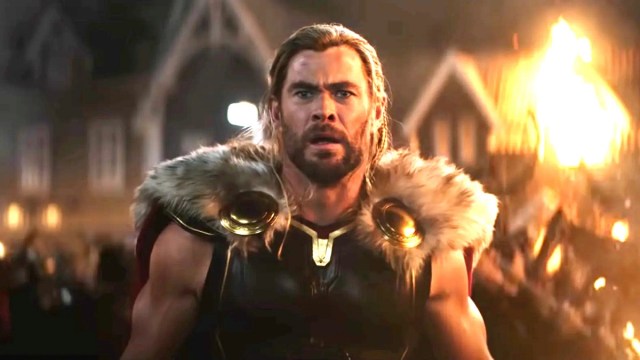 Warning: this article contains spoilers for Thor: Love and Thunder

Thor: Love and Thunder is a god-fest. As Gorr the God Butcher culls deities across the universe with his Necrosword, we meet and say goodbye to more gods than we’ve ever seen in the Marvel Cinematic Universe (MCU). Good job that Taika Waititi’s Korg is there to provide an almost mortal view of Omnipotence City.

Picking that city up from Marvel comics, the MCU builds up its parliament of pantheons, dropping in an infinite amount of gods and celestials, Earth-known and otherwise, and putting Zeus firmly at the top — until the Asgardians turn up.

The MCU has made some significant changes to the gods it has adapted from the page, with Zeus mainly played for laughs and seemingly coming off worst in a spat with Thor. However, one thing doesn’t change; Thor’s quest to track down the God Butcher indirectly opens up the arrival of a legendary Avenger to the MCU in its mid-credit clip.

The Thunder God’s legendary rival Hercules has finally made it to the MCU.

Hercules is a major Avenger who’s been conspicuously absent from the MCU so far. The Greek Demigod arrived in Marvel Comics in late 1964, thanks to legendary creators Stan Lee and Jack Kirby.

In Avengers #10, Hercules was a disciple of Immortus — a future form of incoming MCU Phase 4 bad, Kang the Conqueror. As he was retconned into an imposter three decades later, Hercule’s first legitimate appearance as a rival to Thor came in Journey into Mystery Annual #1 in 1965. Neatly stolen from Greek mythology and adapted to the early issues of Marvel Comics, the hero’s popularity grew quickly.

Herc, as fans affectionately call him, was a guest star in Thor and scored a classic storyline with 1966’s The Titan and the Torment! when he battled the Hulk to a standstill (with help from the U.S. Air Force). Herc stumbled into Hulk on the way to explore a side career in Hollywood, which tells you a lot about his character. Yes, Herc may enjoy his celebrity status even more than his Norse counterpart. But there was no denying his contribution to Earth’s mightiest heroes. After teaming up with the best of the best in 1967, he became a fully-fledged member in The Avengers #45.

In the aftermath of the World War Hulk storyline in 2008, Herc even received a self-titled comic when the third volume of The Incredible Hulk was retitled The Incredible Hercules for almost 30 issues. That run from Greg Pak and Fred Van Lente served up super-strength heroics and an exploration of what it means to be a mythological figure and superhero.

Through Avengers adventures, multiple guest spots, and limited series, Herc has enjoyed quite a character journey over nearly 60 years and proved himself a fan favorite many times over. Still, he’s not enjoyed quite the same Marvel recognition as Thor, something the MCU aims to change.

Herc may seem like a Thor from another pantheon, but there’s more to him than that.

Hercules is the son of Zeus and carries the typical powers you’d expect from a god. He checks off superhuman strength, speed, reflexes, stamina, and endurance. Although he’s a demigod in Greek mythology, Marvel pitches him as the strongest of the Olympians. His exploits in the comics have repeatedly proven his immense power, including crushing rocks and using sequoia trees as spears.

Herc is a great ambassador for the Grecian sporting tradition. He can run at over 100 mph and is an exceptional archer, wrestler, and boxer. Intriguingly, he’s been shown to resist magic to a certain degree, although he’s susceptible to Olympian magic. It’s no surprise the muscle-bound Greek demigod has come to blows with Thor over the years. He has withstood the God of Thunder’s punches and even returned the favor. Hercules’ arrival will surely liven things up for Thor and the Avengers.

In Thor: Love and Thunder, Simon Russell-Beale received a high-billing, and an admittedly great line, briefly playing the Greek God of Wine and Festivity, Dionysus. But come the movie’s end, all eyes were on another of Zeus’ sons.

Despite suffering a lightning bolt to his gut, and a mighty fall during his battle with Thor, Zeus was revealed to be alive and well and taking matters much more seriously during the end credits.

Mostly framed as a monologue, the greatest and oldest god shares his change of universe-view during his recovery, warning that gods have become a joke as the “so-called superheroes” take over. Zeus promises that gods will reclaim their respect as it becomes clear he’s addressing someone specifically. The hearts of Marvel fans around the globe rose as it was revealed to be Hercules, who we then see stand from his knees and swing a mace (very much his equivalent to Mjölnir), making it clear that he understands the assignment. “Yes, father,” Herc says.

Hercules’s introduction isn’t surprising, especially after Thor name-checked the legendary demigod earlier in the movie. However, Herc’s arrival in the MCU leaves the expectation that some compelling comic book rivalry is on the cards. Thor and Herc are on a collision course.

Brett Goldstein is filling Herc’s traditionally skimpy costume. Fans of Ted Lasso will know the qualities the British actor and comedian can bring to the role. We’re used to characters changing a bit between their end-credits introduction and later movie appearances, but he appears to be a sleeker version of the hero-god than we’ve been used to and handier with a razor. We can expect big things from the character as we wait to see the line-up of the Avengers’ next iteration. Herc’s comic ties back to Kang the Conqueror to leave an enticing proposition, as does the mission Zeus gives his son. After all, Lee and Kirby brilliantly stole the character from mythology to turn him into a superhero in the 1960s.

Those leaving Thor: Love and Thunder thinking Odinson had embraced a (relatively) quiet life raising his adopted daughter in the art of warfare should be in no doubt. Whether it’s a further installment of Thor or another team-up, Hercules and the God of Thunder will come to blows.

The question is how long it takes Herc to realize that life on Earth isn’t so bad.