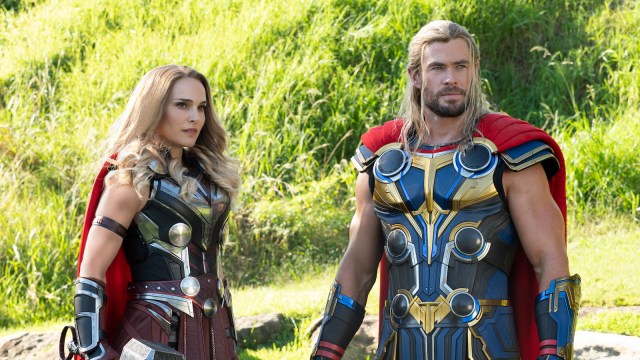 *This article contains spoilers for Thor: Love and Thunder*

After landing on Midgard in 2011, Thor looked like an unlikely candidate to set an MCU record for solo movies. Jump forward 11 years, and Thor: Love and Thunder is the thunder god’s fourth outing, never mind his Avenging antics. While his mighty teammates had flitted between genres in their big-screen solo outings, Thor’s MCU journey has been determined to bend genres to a cosmic level.

In the Marvel universe, we’re familiar with the idea that gods are not higher beings in the traditional sense, but inhabitants of other worlds, planes, and dimensions. Thor’s MCU journey has embraced the cosmic and mythological aspects of Odinson’s story. As he came into his own with his third film Thor: Ragnarok, it looked like the franchise had reached its mythical peak — the long-predicted fall of the gods that wiped Asgard from the universe. But along with Avengers: Endgame, Ragnarok was just the start of a new chapter for the god Tony Stark once called ‘Point Break.’

Thor: Love and Thunder is less drenched in Norse mythology than his other movies. Asgard has been rebuilt on Earth while the universe has widened to include different myths and all-powerful gods. While it features a Viking longboat propelled along the rainbow bridge by two giant goats, the plot centers on the crusade of Gorr the God Butcher, as picked up from the pages of Marvel comics.

The philosopher Confucius is credited with the telling phrase, “Seek revenge, and you should dig two graves, one for yourself.” Thor Love and Thunder is essentially a revenge film, which means some characters have to face the consequences. That said, while it opens with the motivation for Gorr’s vengeance, it ends with a moment of hope.

Jane Foster and Thor’s relationship is the emotional heart of Love and Thunder. Her connection to Thor gives Jane a chance to overcome her devastating cancer. Thanks to a request her ex-boyfriend made of his precious hammer, Mjölnir, she’s given a second and mighty life, but none of the gods in the movie or a trip to Eternity can’t stop Jane’s fate.

Fortunately, Norse mythology has a built-in happy ending. As Jane reaches her final destination, there’s time for an unexpected return. Asgardian Heimdall greets her in Valhalla, looking far more relaxed in his afterlife. So what is Valhalla, and are these characters dead?

Valhalla is just one part of Norse mythology’s complicated structure of life and death — myths that specifically categorize the dead. Northern mythology allocates the deceased to five realms, including Hel, a familiar underground gray space where most souls go after death, and the Realm of Rán, which is the resting place of drowned sailors. Valhalla is the most famous destination. It’s the hall of slain warriors — a shield-lined palace in the middle of a paradise where great warriors known as Einherjar feast on an endless supply of food and drink when they’re not fighting each other. It is truly Viking heaven, and it’s no wonder it’s in many Asgardian dreams.

In the post-credit scene of Thor: Love and Thunder, Heimdall shows Jane the great hall of Valhalla, and we can only imagine the feasting taking place inside. It must be feasting time as there’s no sound of fighting outside.

One way the Marvel Cinematic Universe (MCU) version of Valhalla departs from mythology is its purpose. In mythology, the North’s greatest warriors await the call of Ragnarok when they march through the 540 doors of their hall to join Odin’s forces at the fall of the gods. When we finally reach Valhalla In the MCU — after being mentioned in previous films — Odin has gone, Ragnarok is complete, and Asgard has fallen.

In Marvel Comics, Valhalla first appeared in the pages of Thor in 1968. The realm has been revisited and revised through the decades, notably in the Marvel Ultimate universe. When Thor died in that continuity, he was forced to make several high-risk deals with Hela, the realm’s ruler in mangled mythology. In the current Marvel Comics continuity, Valhalla has been relocated from a remote region on Asgard to a bubble on Niflheim’s vast and icy planes.

The MCU built on the realm’s role as a hidden paradise dimension, where the specially chosen will remain for eternity. You can never say never in comics — Love and Thunder’s jokey run-through of the many times Thor lost his brother Loki was proof of that. So there’s still a chance fallen heroes will return to the MCU, including Natalie Portman’s Jane and Idris Elba’s Heimdall.

Earlier in Thor: Love and Thunder, Thor responded to an appeal of Lady Sif, finding her as the only survivor after a battle with Gorr. The thunder god saves Sif’s life by clarifying Valhalla’s entry requirements — a rare chance for Thor to use his mind rather than his might. As he explains, a warrior has to die in battle to enter Valhalla, so Sif wouldn’t qualify if she died alone after the battle.

That sounds like the MCU’s equivalent of Valhalla’s random entry requirements in Norse Mythology. Valhalla isn’t full of every hero slain in battle. Only half the fallen make it — chosen and led from the battlefield to paradise by valkyries.

Love and Thunder confirms the existence of Valhalla in the MCU – although it doesn’t entirely dispel the idea that it’s part of Asgardian myth or who has made it. Odin didn’t meet the entry requirements despite hearing his wife’s call and evaporating in a gold cloud during Thor: Ragnarok. It’s painfully unclear how Jane qualified for the same reason. Neither was in battle when they died. But as Dr. Foster, not Lady Thor, did make it to the afterlife, perhaps Loki and Thor’s hope that their father is feasting in the great hall came true too.

Even if the MCU’s Valhalla is a bit more wishful thinking than the physical realm, it’s an emotional way to leave us with an undeniably feel-good What If…?