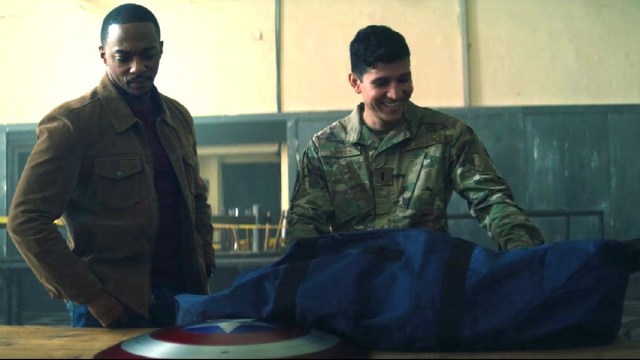 The two biggest talking points coming out of Captain America: New World Order‘s appearance at the weekend’s D23 Expo hinted that we could be in for a polarizing ride, given that there was overwhelming positivity and controversy in equal measure.

Fans were overjoyed to discover that a tease made in the summer of 2008 will finally be paid off 16 years later following the announcement of Tim Blake Nelson’s long-awaited comeback as the Leader, while on the other side of the coin, the casting of Shira Haas as Israeli superhero Sabra has generated a wave of hot takes and thoughts.

Unfortunately, that’s left Top Gun: Maverick star Danny Ramirez overshadowed a little bit, with the rising star’s Joaquin Torres confirmed to be donning his own set of wings as the Marvel Cinematic Universe’s new Falcon, paying off another breadcrumb that was dropped during The Falcon and the Winter Soldier.

Speaking to ComicBook‘s Phase Zero, it doesn’t sound as though Ramirez is too bothered being typecast as the guy who soars through the air in massive blockbusters packed with top-tier talent on either side of the camera.

“I’m excited, man. It’s walking out there and everyone just loves him. To receive that love is just so unique of an experience. rom independent to Captain America: New World Order, just walking out and just being called my name by Kevin [Feige] was nuts. It was crazy.”

Anthony Mackie might be upset that Sebastian Stan ended up in Thunderbolts and not New World Order, but Torres provides another potential bromantic interest for the star-spangled Avenger, who faces a tough task of his own stepping into Chris Evans’ shoes as the lead.