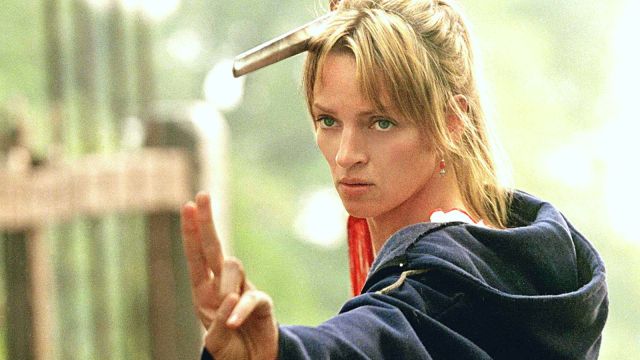 via Miramax
Review of:

Marvel lovers might have put Quentin Tarantino on their blacklist after the director’s perceptive observations on modern movie stardom, but fans of the film auteur can rejoice because two of his best movies have just become easier to stream.

The 2003 title Kill Bill: Volume 1 and its 2004 continuation Kill Bill: Volume 2 are coming to NBC’s streaming platform Peacock in December, and will integrate the platform’s growing catalog of movies, accessible to all subscribers.

This move comes after Paramount Global, which owns the rights to both Kill Bill movies, entered a distribution agreement with Comcast, Peacock’s parent company, earlier this year.

Paramount Global’s investment in Miramax in 2019 brought all titles from the production company previously owned by Disney, and Harvey and Bob Weinstein before that, to its catalog. This includes five Quentin Tarantino movies produced by Miramax: both Kill Bill volumes, Reservoir Dogs, Pulp Fiction, and Jackie Brown.

As such, Kill Bill: Volume 1 and Volume 2 are available to stream on Paramount Global subsidiaries like Paramount Plus, Showtime Anytime, and FuboTV, but will also be available on Comcast’s main streaming service Peacock going forward.

Kill Bill stars Uma Thurman as Beatrix “the Bride” Kiddo, the iconic protagonist of Tarantino’s martial arts/western masterpiece. Beatrix goes on the hunt for her former boss, Bill, after his squad of assassins, named Deadly Viper, tries to kill her at the start of the first film.

Both Kill Bill movies have become cult classics over the years, and are considered by some as Tarantino’s best work, even surpassing his pop culture phenomenon Pulp Fiction. Fans have hoped for a third film to complete the story set up by the first two volumes, but Tarantino’s recent statements about his 10th, and possibly last, movie being an original story have shattered expectations.

Although the films’ legacies have influenced filmmakers to this day, just as Tarantino had been influenced by the masters before him, their new place among Peacock’s catalog will likely bring it to new audiences, who will be lucky enough to discover the modern classics for the first time.