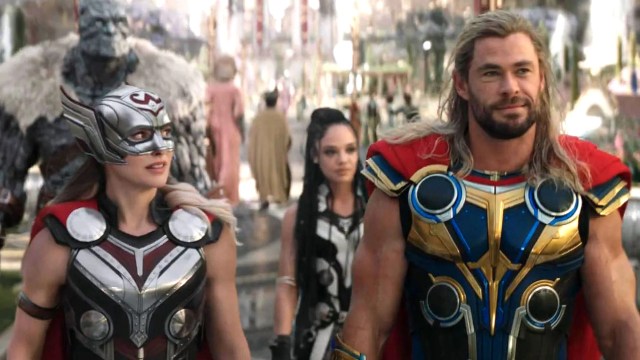 Now that only 10 days stand between hungry MCU fans and the highly anticipated Thor: Love and Thunder, the movie’s cast is here to ask whether you’re ready to rock.

That’s right. While the question might confuse you — I mean, it’s definitely giving Taika Waititi all manner of headaches — it might actually be in reference to all the amazing feats of cinematic insanity that await you in the sequel, not to mention the teaser is once again backed up by the iconic Guns N’ Roses track, “Sweet Child O’ Mine.”

Still, if you’re having trouble distinguishing between these two abstract concepts, Waititi is here to assure we’re all on the same page. “This is not a concert. It’s a movie,” he says in his most Taika Waititi voice, so that we’re not sure whether to take him seriously or not.

Of all the movies and TV shows that have come out of Phase Four up to this point, Love and Thunder is probably the most anticipated, hype-fuelling adventure in the making. The movie not only resurrects Chris Hemsworth’s God of Thunder after his last appearance in Avengers: Endgame, but also bringss back the Guardians of the Galaxy ensemble and Natalie Portman’s Jane Foster as Mighty Thor.

And while they were at it, Waititi and his producers brought back Korg, Tessa Thompson’s Valkyrie, and Jeff Goldblum’s Grandmaster, in case anyone had doubts that this film was going to be anything other than absolutely hilarious.

At the end of the day, though, and despite Waititi’s best efforts, this is an MCU movie, so the ensemble will be going up against one of their most frightful adversaries to date. Gorr the God Butcher is doing the honors this time, with the Academy Award-winning Christian Bale bringing him to life on the big screens when Thor: Love and Thunder premieres on July 8.