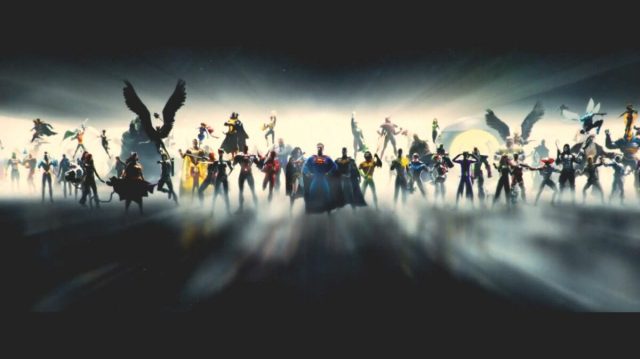 Following a restructuring of Warner Bros’ Discovery’s DC division, it would appear that the name of the comic book-inspired cinematic universe, in which movies like Man of Steel and Justice League take place, has changed from DCEU to DCU. But just what does DCEU stand for and where did the moniker come from to begin with?

First of all, the phrase DCEU stands for DC Extended Universe (with “DC” standing for Detective Comics, but the two-letter abbreviation has become the accepted term). By the mid-2010s, this phrase was already accepted by many fans as the de-facto term for the shared cinematic universe of DC. However, the phrase actually started out as a joke and only existed for a relatively brief amount of time in any official capacity under the Warner Bros. umbrella.

Early on in the cinematic universe of DC, when the only film under that umbrella was Man of Steel, it was referred to by some as the DC Cinematic Universe (DCCU), which was what Forbes called the franchise in an article back in 2014.

DCEU started as a joke

After that, a preview article highlighting the then-forthcoming Batman v Superman: Dawn of Justice coined an entirely new phrase. Author Keith Staskiewicz jokingly called the movie franchise DC Extended Universe (DCEU) in an Entertainment Weekly article about BvS back in 2015, prior to the second film in the shared universe’s ultimate release the following year. Even though Staskiewicz was being sarcastic, the name stuck and fans began calling DC’s cinematic universe the DCEU.

Abraham Riesman, a writer for Vulture, later claimed in a now-deleted 2017 post on Twitter (via ScreenRant) that “officials at WB/DC told me no one uses the term ‘DC Extended Universe’ internally and that it’s not official.” Then in May 2020, it seemed that WB officially adopted the moniker DCEU because it appeared as a category on the streaming service HBO Max, ScreenRant later reported.

Since the 2020 launch of HBO Max, the parent company underwent a regime change. Warner Bros. merged with Discovery to become Warner Bros. Discovery — a deal that was finalized in August of this year — and with it brought a newly-minted CEO at the helm, David Zaslav.

Perhaps it’s because of this change in leadership and company restructuring that the phrase DCEU was nowhere to be found in an announcement that director James Gunn and producer Peter Safran would be the new co-chairs and co-CEOs for WBD’s newly-formed division, DC Studios. Instead, Zaslav released this prepared statement regarding Gunn and Safran’s promotions:

“DC has among the most entertaining, powerful, and iconic characters in the world and I am thrilled to have the singular and complementary talents of James and Peter joining our world-class team and overseeing the creative direction of the storied DC Universe (emphasis ours).”

It should also be noted that the moniker DC Universe is not new in itself as it has been in place to describe the mainline comic book universe of the franchise for several years now, as CBR reported back in 2016.

If you weren’t 100 percent convinced that DCEU has officially been dropped as a term from WBD, consider the fact that the cinematic franchise no longer bears the name on HBO Max. Instead, the films are listed under the simple umbrella of DC.

All of this would seem to point to DCEU only existing in an official capacity by the movie studio in charge of it for about two years, at most, from 2020 to 2022. Quite a brief existence for a phrase that has been on the tongues of comic book movie fans since 2015.