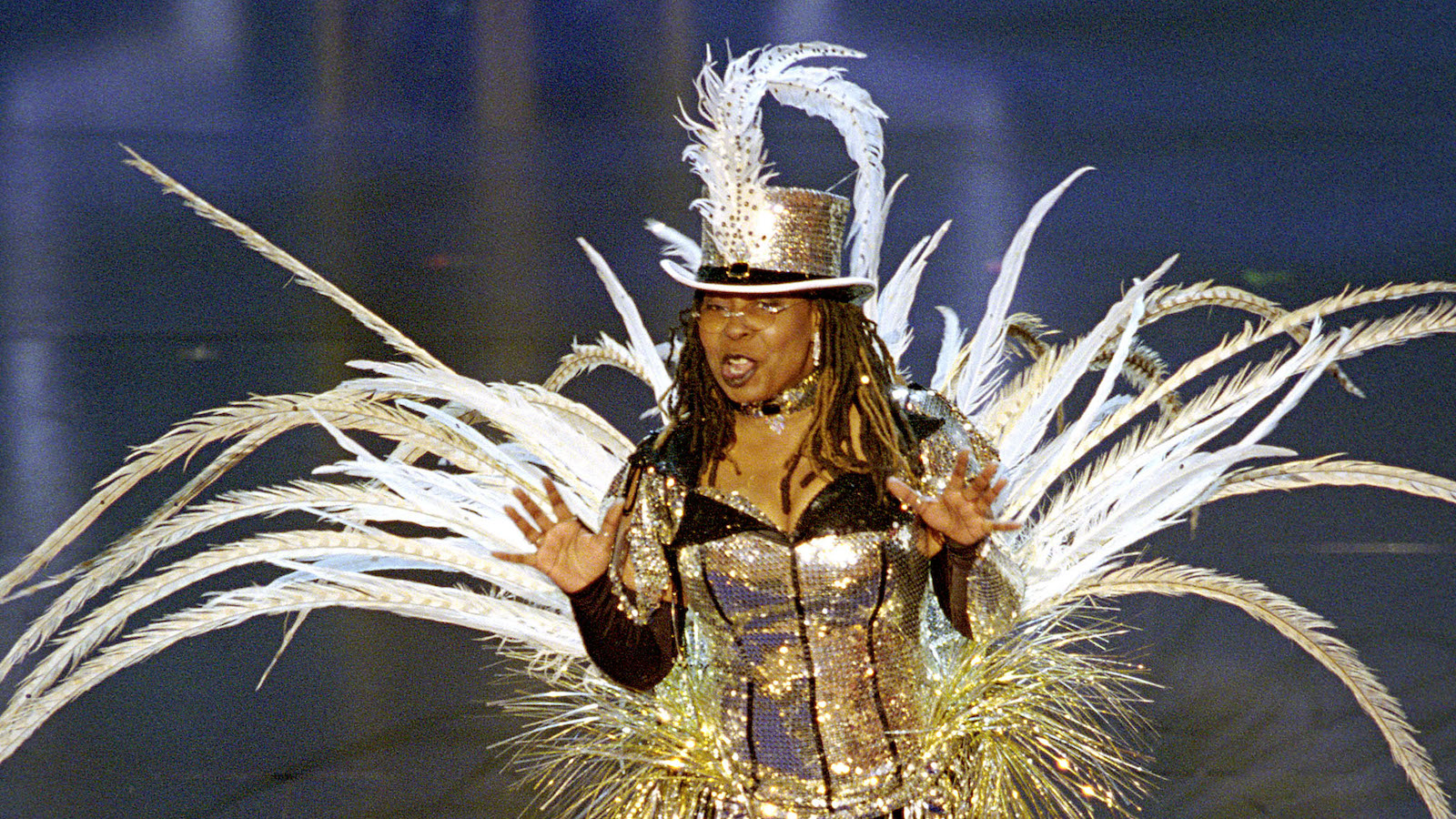 The 94th Academy Awards are right around the corner with the 2022 ceremony airing on Sunday, March 27.

The nominees for this year’s event were recently announced and include a number of very deserving names. Dune and Netflix’s Don’t Look Up are up for Best Picture, competing with several other excellent contenders, including Nightmare Alley and The Power of the Dog. Even Spider-Man: No Way Home received a nomination in the Best Visual Effects category.

Talk of who will host the upcoming event is stirring up nearly as much excitement as the nominees themselves. A number of huge names have hosted the Oscars in the past, often while enjoying a particular high in their careers. Fans are pitching some of their favorite stars for the coveted job, with names like Tobey Maguire, Andrew Garfield, and Tom Holland — all of whom appeared in the MCU’s No Way Home in 2021 — frequenting fans’ top picks.

For three years now, the Oscars have aired host-less ceremonies, as noted by Vogue. The string of unhosted events started in 2019 when the controversy surrounding initial host Kevin Hart caused the comedian to withdraw from the position. The COVID-19 pandemic forced the Academy to continue with its host-less ceremonies in 2020 and 2021, leaving viewers with a three-year string of Oscars with no host in sight.

A Jan. 11 announcement from the president of Hulu Originals & ABC Entertainment confirmed that the 2022 Oscars will resume hosted ceremonies but did not announce who might helm this year’s event.

This year’s Oscars will reportedly feature multiple hosts, an idea which fans found thoroughly agreeable. A number of potential picks are reportedly being considered, including Saturday Night Live’s Tina Fey, Amy Poehler, and Maya Rudolph alongside Selena Gomez, Steve Martin, and Martin Short from Hulu’s Only Murders in the Building.

The news of multiple hosts got fans even more excited at the prospect of a Spidey-heavy event and prompted even more people to pitch Garfield, Maguire, and Holland as hosts. The trio would make an excellent choice for the job, fresh off their hugely successful 2021 release, but fans are still awaiting confirmation of the event’s official selections.

As they await news on this year’s host, people are looking back on hosts of the past. Dozens of huge stars have hosted the event over the years, leaving a permanent mark on one of Hollywood’s most enduring ceremonies. Here are some of the most noteworthy people to hold the honor in the past.

Who has hosted the Oscars?

In total, more than 75 people have hosted the hugely popular event, which aired its very first ceremony in 1929. Throughout its history, hosts for the Academy Awards tend to be huge names at that moment in cinema history. Stars like Bob Hope, Fred Astaire, and Frank Sinatra all graced the world with an appearance — or 19, in Hope’s case — at the event, and more recent years have seen new celebrity favorites take up the tradition.

We’re not going to list every single host the Oscars have ever seen, as that would make for a painfully long article. Instead, we’re aiming to highlight a few of the most recent hosts, alongside some of the event’s most popular and enduring. Cherry-picked from the wealth of stars who’ve taken on the task over the years, here are some of the Oscars’ biggest hosts.

As noted above, the last three years have seen the Oscars air hostless ceremonies. The ongoing COVID-19 pandemic, paired with some widely publicized drama in 2019, resulted in the event’s decision to ditch tradition and veer into a host-free format. Before the stint of host-less ceremonies, however, Jimmy Kimmel helmed the Oscars for two years in a row.

He first held the position during the 89th Oscars, which aired in 2017. He then returned to host the following year, bringing his late-night humor to the big stage again in 2018. While most people felt Kimmel performed reasonably well at both events, he is far from the first thing people think of when recalling the 2017 Oscars. Instead, most minds tend to turn to an embarrassing mix-up, which saw the announcement of the incorrect movie for best picture. La La Land was briefly given the honor before the mistake was caught, and the real winner — Moonlight — was announced.

Before Jimmy Kimmel took up the helm, Chris Rock made history as the host of 2016’s 88th Academy Awards. He spent much of his opening monologue skewering the whitewashed nature of the ceremony, shining a harsh spotlight on the year’s complete lack of any nominees of color.

While Rock’s delivery was controversial, it aged immensely well. It was a necessary and accurate criticism at the time and, unfortunately, remains relevant today. The Oscars continue to court controversy through a lack of nearly enough nominees of color, and Rock was one of the first to publicly blast the Academy for its continued issues with whitewashing. That doesn’t mean he got it all right. He also made some thoroughly inappropriate jokes about Asian Americans, according to NBC News, leading to deeply mixed reviews about his performance.

Back in 2015, Neil Patrick Harris was at the absolute peak of his popularity. Fresh off a number of popular roles, including his nearly decade-long stint on CBS’s How I Met Your Mother, Harris appeared as the host of the 87th Oscars. His musical talent shone through his opening number, as did his excellent comedic timing.

Harris was practically born to host awards ceremonies. His undeniable charm seeps through every second of his time on stage, but that didn’t stop some people from criticizing his performance. Some viewers saw a few of Harris’ jokes as off-color, and his charm didn’t manage to communicate with all audiences.

Despite her more recent fall from grace, Ellen DeGeneres has long been considered one of the best Oscar hosts of all time. Her first stint as a host in 2007 was met with mixed reactions, but her return in 2014 was widely viewed as an inarguable success. Her classic sense of humor landed well among both the in-person audience and audiences at home, and her rapport with the attending stars was palpable.

DeGeneres was praised for her humorous and charming performance in 2014 and was credited for bringing the event into the social media age. The widely-shared selfie she snapped with a number of the event’s biggest celebs remains one of the enduring markers of her success as a host.

More than six years following his departure from the Daily Show, Jon Stewart remains an enduringly popular comedian and political commentator. He continues to pump out content via his Apple Plus series, The Problem With Jon Stewart and maintains a loyal fanbase. The first time he hosted the Oscars in 2006, Stewart was at the peak of his popularity. He was freshly coming off his stint on the Daily Show, and fans were eagerly awaiting his next project.

While Stewart was a good host in both 2006 and during his return in 2008, he didn’t blow audiences away. His performance in 2006, in particular, disappointed, as noted by the Independent, which labeled his hosting as “tepid.” He upped his game in 2008, however, delivering a far more enjoyable show for audiences. His jokes landed better, he left more space for the nominees to shine, and Stewart was overall praised for learning from his first experience as a host.

It’s no surprise that Hollywood legend Whoopi Goldberg blew audiences away when she hosted the 74th Oscars in 2002. It was her fourth time appearing as a host, after all, which meant that Goldberg had plenty of relevant experience on the job.

Goldberg was praised for her handling of sensitive moments during each of her appearances on the show, as well as for her flawless comedic timing. She made history in 1994 when she became not only the first Black woman to ever host the event but the first woman in general. She remains an all-time favorite for many fans and even suggested herself as a replacement for Kevin Hart in 2019. The event ultimately proceeded without a host, but many think Goldberg’s presence would have improved the affair.

However, if they want to avoid controversy, this really isn’t the year to bring Goldberg back.

It’s been more than a decade since Hugh Jackman enjoyed his one and only appearance as an Oscars host, but his 2009 performance remains a fan favorite. He nailed the musical opening to the event, shared excellent chemistry with Anne Hathaway in their silly duet, and overall delivered a thoroughly unforgettable event.

Some remember Jackman’s year hosting as a touch-over-long, thanks to the multiple musical performances and guest appearances. These types of additions have slowly disappeared from the event, as organizers strive to shorten the ceremony’s length and keep viewers interested. Jackman’s year was one of the last to include multiple performances and skits throughout its runtime and is largely remembered for delivering an Oscars performance on par with the very best.

Bob Hope and Billy Crystal changed the game for Oscar hosts. Hope remains the single most frequent Oscar host of all time, appearing as host a whopping 19 times — ten times more than anyone else. Crystal is the closest runner-up, with a full nine hosting gigs under his belt.

For years, Hope defined what it meant to be an Oscar host. He helmed the event for four uninterrupted years between 1940 and 1943 before coming back in stints over the following years. Crystal came in hot fifty years after Hope first hosted the event and went on to redefine the way hosts presented themselves during the event. He’s been praised over the years for his showmanship, according to the Independent, and remains an enduringly popular Oscars host.

A few hosts were less fortunate in their reception from fans, quickly becoming some of the event’s least-liked hosts. Stars like Chevy Chase, Anne Hathaway, and James Franco all absolutely bombed during their attempts to headline the annual event, as they limped through jokes and did their best to keep things running. Though, to Hathaway’s credit, she couldn’t win with Franco slacking as a co-host. They’ve since gone down in history as some of the event’s absolute worst hosts, alongside fellow flops Seth MacFarlane, David Letterman, Alec Baldwin, and Liza Minelli.

These hosts are often just as well remembered — if not better remembered — than the hosts that perform well. Over the last decade or so, we’ve seen a number of excellent hosts appear alongside several lackluster hosts. How audiences receive hosts seems to largely rely on how well jokes and skits land, along with how popular the host is at the time of their appearance. Several hosts — like Ellen DeGeneres — have seen their popularity plummet in the years following their stint as a host, but were initially received quite well. Others, like Hugh Jackman, have only become more popular in the years following their Oscars appearances. This has boosted their Oscars performances retroactively and helped build their popularity even more.