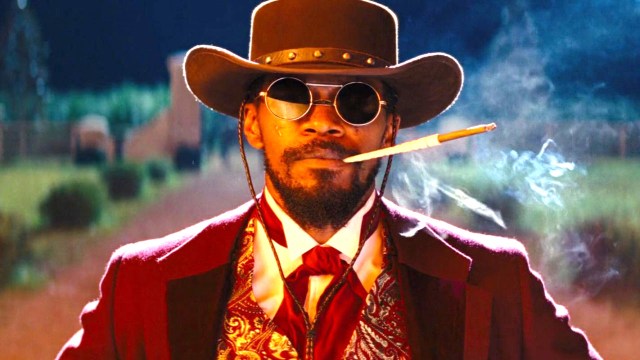 Recently the origin of the screenplay behind the 2012 Quentin Tarantino film, Django Unchained has come into question. It was suggested by Kanye West that he came up with the story of the film, passing it along to Jamie Foxx who then passed it along to Tarantino. If you are unfamiliar with the film it starred Jamie Foxx as the titular Django, a slave who tries to find his wife Broomhilda von Shaft (Kerry Washington) with the help of a German bounty hunter Dr. King Schultz (Christoph Waltz). The film is Tarantino at his best and features Leonardo DiCaprio as the main villain, Calvin Candie. Fortunately, who wrote the screenplay of this classic movie is more cut-and-dry than rumors and accusations, as the story behind the story is readily available. Let’s go through the story of who wrote Django Unchained, and the origins of its conception.

Django Unchained is one of the ten films written and directed by Quentin Tarantino, and there were no other writing credits on the 2012 film, as you can see from the trailer above. Kanye West, now known as Ye West, claimed that he came up with the idea for Django Unchained while working with Jamie Foxx on his song “Gold Digger.” Quentin Tarantino recently debunked West’s claims, explaining that to his recollection West pitched Tarantino to film a music video for “Gold Digger” in which he ironically played a slave.

While Kanye West did not write Django Unchained, Tarantino did borrow some of the ideas in the film from other movies. He stated that he first thought of the idea of the film while writing a book about Sergio Corbucci, the Italian director who directed the 1966 Spaghetti Western, Django. Does that sound familiar? While he may have borrowed the name from Sergio Corbucci’s film he did not borrow much else from it, as the film follows a Union soldier. Django itself was an adaptation of Akira Kurosawa’s Yojimbo. Yojimbo was inspired by a novel and you can probably trace the story or elements of the story even further down the line.

Quentin Tarantino obviously wrote the screenplay for Django Unchained, but he often talks about how he borrows concepts and techniques from other films, and most film buffs know that his movies are usually amalgamations of smaller, usually lesser-known films. And it is obvious that he likes the archetype of a black man killing racist white men, as he copied the archetype for The Hateful Eight with Samuel L. Jackson’s character Major Marquis Warren. Quentin Tarantino also could have been inspired by the true stories of some men throughout and prior to the Civil War. But he has not gone on record saying that the film is based on a true story with the events of the film being fiction and extremely stylized fiction at that. So officially Quentin Tarantino wrote and directed Django Unchained, even if he wrote it after being inspired by other films.