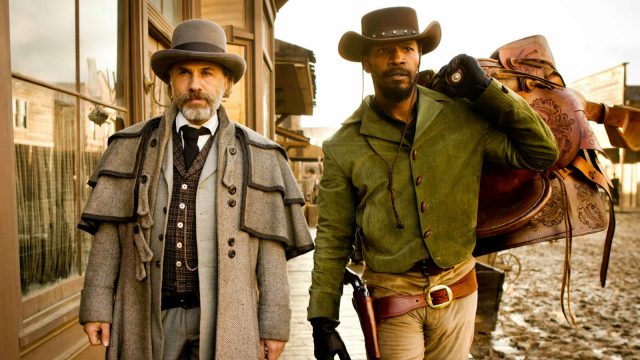 Quentin Tarantino appeared Thursday night on Jimmy Kimmel Live! and was asked about Kanye West’s recent claims that he gave Tarantino the idea for his blockbuster movie.

Released in 2012, Django Unchained made $425 million at the international box office and won multiple Academy Awards including Best Screenplay for Tarantino, who also directed the film. Starring Jamie Foxx in the titular role, the movie can be described as a slave film that becomes more of a bounty hunter revenge film.

Tarantino began working on the screenplay in 2007, two years after the release of Kanye’s hit song Gold Digger, which went on to win a Grammy for Best Rap Solo Performance.

Jamie Foxx actually ended up performing during the song’s opening and also appearing in the video which is not reminiscent in any way to Tarantino’s film. However, the video won the BET Award for Video of the Year.

Tonight, Jimmy Kimmel asked Quentin Tarantino if indeed it was Kanye’s idea to which Tarantino responded, “I had the idea for Django for a while before I ever met Kanye.”

However, Tarantino explains what Kanye’s idea was, telling Kimmel that they met up for the first time (Tarantino did not mention Foxx) and the rapper told him he wanted to have a video for each song on the Late Registration album. Furthermore, he wanted to have a big name director for each video and that each video would be a part of a collective story that when viewed together created a singular movie.

Tarantino further explained, “He did have an idea for a video and I do think it was for the Gold Digger video that he would be a slave. The whole thing was the slave narrative where he’s a slave singing Gold Digger.”

Lastly, Tarantino added, “It was meant to be ironic……I wish he had done it. It sounded really cool. Anyway, that’s what he’s referring to.”

Considering recent events, it’s odd that Kimmel never asked Tarantino about Kanye’s controversial comments that have cost him a fortune in business dealings, but it’s also likely he didn’t want to put his guest on the spot.