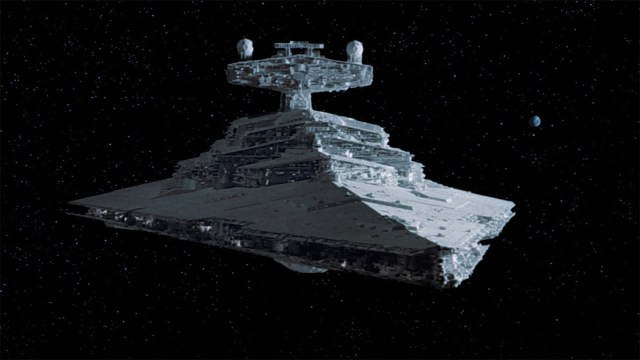 It’s a fairly simple question, yet one that nearly every kid who’s taken their first step into a larger galaxy and become a Star Wars fan finds themselves asking at one point: if only the Death Star and Starkiller base are powerful enough to destroy a planet, then why the heck are all of the Empire’s capital ships called Star Destroyers? Can’t they destroy stars? Doesn’t that make them more powerful than Death Stars? Why does everything have the word “Star” in its name anyway?

Reddit user TheMonsterXzero54 asked that very question in the r/StarWars forum recently and we’re happy to say we have an answer.

Well, while the Empire really seems to favor “Star” as a branding (and in the case of “Starkiller” base, a good in-joke), the “Star” in Star Destroyer doesn’t refer to its firepower or other capabilities but merely refers to the medium through which the ship travels the stars of the galaxy.

The term “destroyer” is a naval term in use since 1885 meant to designate a specific type of ship. Originally it described a class of ship intended to escort troops and supply convoys from torpedo attacks and was also known as a “Torpedo Boat Destroyer.” When the function of the boat extended beyond that specific duty the term was shortened to just “destroyer.” So, much like “cruiser” or “battleship” or “aircraft carrier,” “destroyer” just refers to a type of ship.

Star Destroyers then are a type of destroyer that travels the stars. Not a ship that is capable of destroying stars — Han Solo even says in A New Hope that the entire Imperial fleet wouldn’t have the firepower to destroy even Alderaan, much less a star.

The fearsome ships, which are in many ways as much a symbol of the Empire as Darth Vader himself, were originally intended to be smaller two-man vehicles that pursued the Tantive IV in the opening scene of A New Hope before director George Lucas and Industrial lights and Magic opted for a larger but more cost-efficient capital ship to appear in the scene.