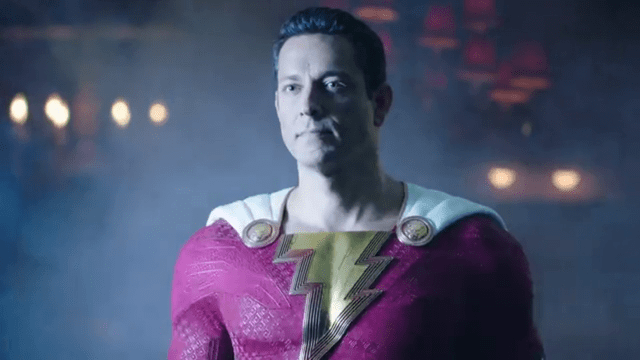 The final scene of 2019’s Shazam!, which saw Superman turn up in Billy Batson’s high school cafeteria, was hilarious, sure, but also disappointing — the Big Blue Boy Scout was only seen from the neck down as Henry Cavill was unable to shoot the scene. Ever since, fans have been hoping that the sequel would fix this oversight and have the true Man of Steel show up to join forces with the aged-up superhero. But what are the chances of this happening in Shazam! Fury of the Gods?

Shazam himself Zachary Levi was asked this question while hyping up the upcoming movie at Comic-Con this Saturday. Just as you would expect, he was reluctant to say too much, but he ultimately appeared to deny that Cavill will be popping by for a cameo in Fury of the Gods. Although he didn’t exactly rule out the possibility for sure.

“I can neither confirm nor deny allegations such as these,” Levi said, looking nervous. “These are not questions you’re allowed to ask me on this stage right now. But no?”

The first trailer for Fury of the Gods, which just debuted, doesn’t shy away from the connections to the wider DCEU, however, with Levi’s Billy Batson suffering from imposter syndrome as he unfavorably compares himself to the likes of the Flash, Aquaman, and Batman. Yet Shazam will have to step up and prove he can measure up to the Justice League when he and his superpowered family have to face off against Hespera (Helen Mirren) and Kalypso (Lucy Liu), two corrupt Greek goddesses

In the run-up to SDCC, rumors abounded that WB was going to announce a major comeback for Henry Cavill, but such an announcement never came during the studio’s theatrical panel, so Levi’s comments are not the only blow for Supes stans have to suffer this Saturday. At least Shazam supporters are being treated a whole lot better. Don’t miss Shazam! Fury of the Gods when it bolts into theaters this Dec. 21.