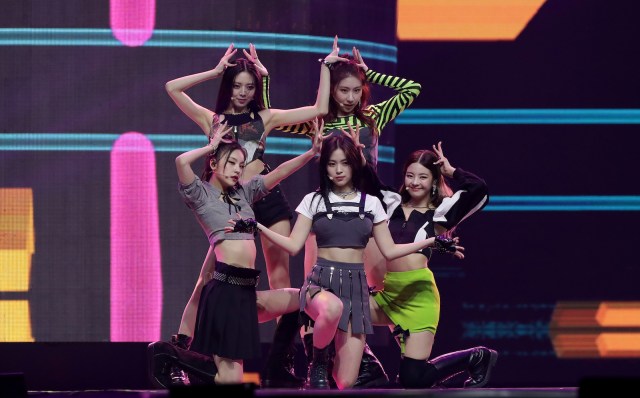 The K-pop phenomenon seems to have taken over even the most remote corners of the world, and with it, more and newer Korean artists have their chance to shine. Among them, one of the most promising acts is ITZY, a five-member girl group under JYP Entertainment, whose popularity seemed instantaneous after its debut. If you know your way around the K-pop scene, you’ve probably heard about them.

The group debuted in February 2019, with the release of their single album IT’z Different, and the music video for its title track “DALLA DALLA.” Right from the get-go, ITZY caused quite the stir in the K-pop world, as “DALLA DALLA” beat the record for most watched YouTube music video within 24 hours by a debut group, and went on to win multiple Korean music show awards. In their short career, the band has also become the fourth Korean girl group to enter the Top 10 on the Billboard 200 chart, after TWICE, BLACKPINK, and aespa.

Best known for its message about individuality, ITZY has several music videos conveying to the audience how the members strive to be true to themselves, and making it clear they don’t like being compared to others or put into neat little boxes. Energetic, authentic, and bold are three words commonly used to describe this quintet, but if you’re looking to get to know them better, here’s an introduction to each of the members to help you along.

Born on May 26, 2000, Hwang Yeji is the oldest ITZY member and is described as someone with a high sense of responsibility, a fundamental quality to any group leader, which she is. In the band, she also takes the roles of lead vocalist, and sub-rapper, as well as being one of the main dancers. At 22 years old, Yeji seems to be the member with the most TV screen exposure, having made various appearances on Korean reality shows, music shows, and even the popular 2015 drama Twenty Again. Seems like being on camera is no trouble for this member.

With the role of ITZY’s main vocalist, and additionally a sub-rapper, Lia is the second oldest of the bunch, born on July 21, 2000. Unlike her bandmates, Lia’s stage name differs from her birth name, Choi Jisu, and it came about as a shortened version of her English name, Julia. While she’s originally from Incheon, South Korea, she moved to Canada at an early age, attending elementary school there for three years. Because of this, Lia can speak fluent English, which is undoubtedly an asset to any group trying to establish itself worldwide.

Being the shyest among the members, you’d think fame isn’t something Shin Ryujin would actively pursue; and you’d be right. Unlike most idols that audition for entertainment companies, she was cast by JYP at a GOT7 fan-sign event. Born on April 17, 2001, Ryujin is ITZY’s certified main rapper, as well as lead dancer, which is why we can almost always spot her taking the central position in the group’s choreographies. In fact, Ryujin’s popularity soared in 2020 due to what became known as her iconic “shoulder dance”, a choreography move that went viral for its difficulty level, as people online tried their best to recreate it (usually with little success).

Born on Dec. 9, 2003, Shin Yuna is known as the maknae, a Korean word to indicate the youngest person in a group. Despite this, she is also currently the tallest ITZY member, standing at five feet and seven inches, having surpassed Yeji by a mere inch. Full of extroverted charm, Yuna is the group’s lead rapper, sub-vocalist, and visual, a position in K-pop given to the member whose face is considered the most appealing. But, of course, her looks aren’t all there is to her; Yuna is described as a very optimistic and imaginative person, sometimes coming off as a happy-go-lucky type of gal.

This self-proclaimed chocoholic was born on June 5, 2001, and she had the longest trainee period out of all the members, awaiting her debut for five years. Although she’s a sub-vocalist and sub-rapper, as the most experienced dancer in the group, Lee Chaeryeong’s primary role is being the main dancer, along with Yeji. She has a background in both music and dance, having attended KYW Dance School, as well as an Arts High School in Korea with a musical focus; because of this, she is said to be a good composer and songwriter.

And there you have it! Now you know a bit more about each ITZY member, and hopefully, it was enough to quench your thirst for information. If on the other hand your curiosity only increased, waste no time diving deeper into their world; you’ll certainly have no trouble finding a plethora of content to go through.