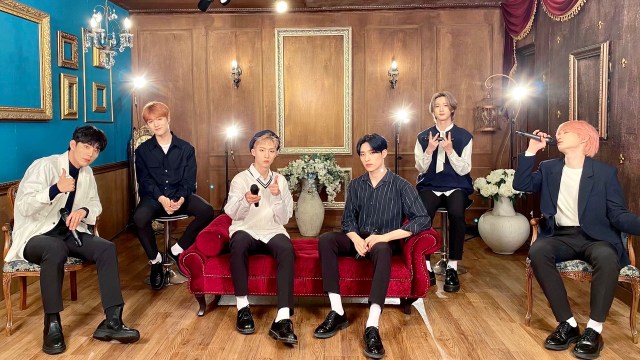 P1Harmony is a six-member K-pop boy group created and managed by FNC Entertainment. The group debuted in 2020 with the EP Disharmony: Stand Out and the movie P1H: The Beginning of a New World. P1Harmony consists of: Keeho, Jiung, Theo, Intak, Jongseob, and Soul.

To date, P1Harmony has released four EPs, with two from this year – Disharmony: Find Out and Harmony: Zero In – earning the group their highest peaks on the Circle Album Chart so far. Here are all the six members of P1Harmony for a chance to get to know the rising boy group a little better.

Yoon Keeho was born on Sept. 27 in 2001 and is 21 years old. He stands at 179cm (five foot nine inches) tall and is a singer, rapper, dancer, and leader of the group. Born and raised in Toronto, Canada, Keeho became interested in music and performing while in grade school. In 2017, he passed the FNC Global Auditions and became a trainee. He was the first one to be revealed as a member of P1Harmony after training for two years and nine months.

Choi Taeyang, also known as Theo, was born on July 1 in 2001 and is the oldest member of P1Harmony. The 21 year old singer, songwriter, and dancer stands at 181cm (five foot ten inches) tall. Theo graduated from Hanbat High School and attended Daejeon Dance and Vocal Academy. He was a trainee at SM Entertainment for a year before auditioning for FNC Entertainment in 2018. He successfully passed, and was a trainee for a year and six months before P1Harmony’s official debut. He was the second member to be revealed.

Choi Jiung was born on Oct. 7 in 2001 and is 21 years old. He is a singer, songwriter, and rapper, and stands at 178cm (five foot nine inches) tall. Jiung was scouted by an FNC staff member while he was at his dance academy. After passing an FNC Entertainment audition in 2017, he became a trainee, and trained for three years before P1Harmony’s official debut. He dropped out of high school and acquired his GED certificate. Jiung was the third member of the group to be revealed.

Hwang Intak was born on Aug. 31 in 2002 and is 19 years old. He is a rapper, songwriter, and dancer, and stands at 182cm (six foot) tall, making him the tallest member of the group. In 2017, he joined FNC Entertainment as a trainee, and stayed one for three years and eight months before officially debuting as a member of P1Harmony. Intak has been interested in music, dancing, and performing from a very young age. He graduated from Kyunggi High School earlier this year. Intak was the fourth member to be revealed.

Haku Shota, also known as Soul, was born on Feb. 1 in 2005. He is 17 years old, and stands at 177cm (five foot eight inches) tall. He is a singer, rapper, and dancer. Born and raised in Saitama Prefecture, Japan, Soul became interested in music when his parents introduced him to the K-pop groups TEEN-TOP and B.A.P. He joined FNC Entertainment in 2018 and was a trainee for two years before P1Harmony’s debut. Soul was the fifth member to be revealed.

Kim Jongseob was born on Nov. 19 in 2005 and is the youngest member of the group. The 16 year old rapper, songwriter, and dancer stands at 177cm (five foot eight inches) tall. He began gaining fame when he participated in and won the sixth season of the popular Korean reality TV competition K-pop Star. Jongseob was also a former trainee under YG Entertainment and a contestant on the YG survival program Treasure Box but was eliminated early on. Jongseob dropped out of Seonyu Middle School but took his middle school equivalency exam and passed it. He joined FNC Entertainment in August 2020 and was an FNC trainee for only three months before P1Harmony’s debut. Jongseob was the last member to be revealed and spent the least amount of time as a trainee.