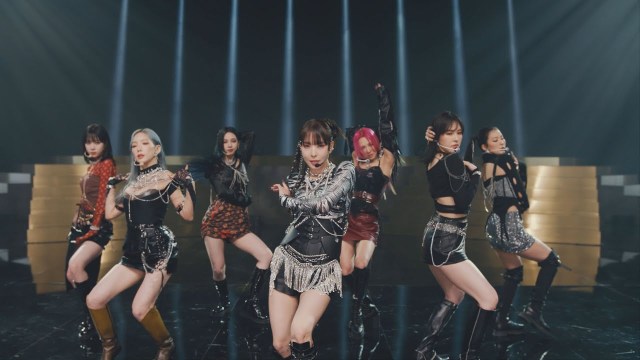 Image via YouTube/Girls On Top

GOT the Beat is the latest K-pop supergroup making waves across borders for their sexy charm, finely choreographed dance numbers, and cohesion.

Boy and girl groups continue to achieve international success and appeal, and supergroups further capitalize on that success within the genre by merging already established fan bases. A K-pop supergroup is the coming together of several artists who are already successful to form a musical group. Usually these groups consist of a mix of solo acts and members of other popular groups.

GOT the Beat was formed by the sought after entertainment agency SM Entertainment as a sub-unit of their brand new project titled Girls on Top.  They officially debuted earlier this year in January, and while many other girl groups emerged this year, they stand out as they consist of some of K-pop’s biggest stars. They released their debut single “Step Back” on Jan. 3 to mostly mixed reviews, but the song still attained commercial success, with its music video garnering over 100 million views on YouTube. Here are the talented members of Got the Beat.

One of the most popular K-pop idols ever, Kim Tae Yeon (popularly known as Taeyeon) is a successful singer and dancer who rose to fame as a member and leader of the highly successful girl group Girls’ Generation, which debuted in 2007. An SM Entertainment darling, Taeyeon has participated in some of the agency’s other successful projects. She was born on March 9, 1989 and stands at five feet two inches tall.

Taeyeon was the first member of Girls’ Generation to pursue a successful solo career, releasing her debut EP I in 2015. Her sophomore EP Why was released a year later and both efforts were commercially successful, establishing her as a definitive solo star. Her three full-length albums — My Voice in 2017, Purpose in 2019, and INVU in 2022 — have all been well-received. Taeyeon is also regarded as a fashion icon in South Korea and is one of the highest-selling artists in the country.

With 20 studio albums under her belt and a career spanning more than two decades, it’s no wonder that BoA is referred to as the “Queen of K-pop.” She is one of the most famous and successful K-pop artists ever and one of the first to gain mainstream international success. She was born Kwon Bo-ah in 1986 and stands at five feet two inches tall. She released her debut album at 13 years old after two years of intensive idol training, and thus began her rapid rise to fame.

BoA is also the first K-pop singer to breakthrough into the Japanese entertainment market, establishing her as a multi-border talent. The dancer, actress, host, and singer has also appeared in numerous high profile television series and competitions, including Produce 101, Listen to Love, and The Voice of Korea.

She remains one of the most marketed Korean artists in history, becoming a staple figure in not only K-pop but also the entire continent of Asia. Her most recent album, Better, was released in 2020 and received widespread acclaim, with many critics touting it as the best K-pop album of the year.

Born on Sept. 22, 1989, Kim Hyo Yeon, popularly known as Hyoyeon, joins Taeyeon as the second member of the influential girl group Girls’ Generation. Hyoyeon has proven to be one of the country’s finest dancers, as well as one of the most fashionable K-pop idols.

She was the first member of Girls’ Generation to publish a book which features the idol’s preferred looks, as well as fashion and beauty tips. In 2018, she began to DJ in several clubs under the moniker “Hyo.” While she has spent part of the last few years releasing singles, Hyoyeon didn’t release her first EP until May this year. The project, titled Deep, was warmly received and moderately successful.

Kang Seul Gi, or Seulgi for short, is one of the members of the K-pop group Red Velvet as well as its spin-off subgroup Red Velvet – Irene and Seulgi. She was born on Feb. 10, 1994 and stands at five feet three inches tall. She got her big break after successfully impressing the talent managers at an open call audition by SM Entertainment in 2007. She debuted alongside the other members of Red Velvet in 2014.

Since the success of Red Velvet, Seulgi has become a force to be reckoned with, becoming one of the most sought after personalities with a strong audience of young followers. She is considered a fashion influence in South Korea, and has garnered praise for her artistic endeavors. In 2021, she became a brand ambassador for Salvatore Ferragamo, an Italian luxury brand.

Wendy was born Shon Seung Wan on Feb. 21, 1994 and is another member of Red Velvet. She left South Korea as a child, moving first to Canada and later to the United States to further her education. She began her journey with SM Entertainment in 2012 after auditioning at a global audition in Canada and debuted alongside the rest of the members of Red Velvet in 2014.

Outside of Red Velvet, she has collaborated with several artists from around the world and finally released her debut EP Like Water in April 2021, becoming the first member to go solo. Like Water was met with very positive reviews with particular praise going to the singer’s vocals.

Karina was born Yu Ji Min on April 11 in 2020 and is a member of the K-pop girl group Aespa, one of the leading groups of the new decade. She trained for four years before making her debut with the rest of the group.

She is the leader of the group, as well as one of the group’s rappers and main vocalists. She and her fellow members are global ambassadors for the luxury brand, Givenchy.

Dancer and singer Winter is a member of girl group Aespa, and is the youngest member of Got the Beat. She was born Kim Min Jeong on Jan. 1, 2001.

She enjoys several privileges as a member of Aespa, including being the muse for Acqua di Parma.