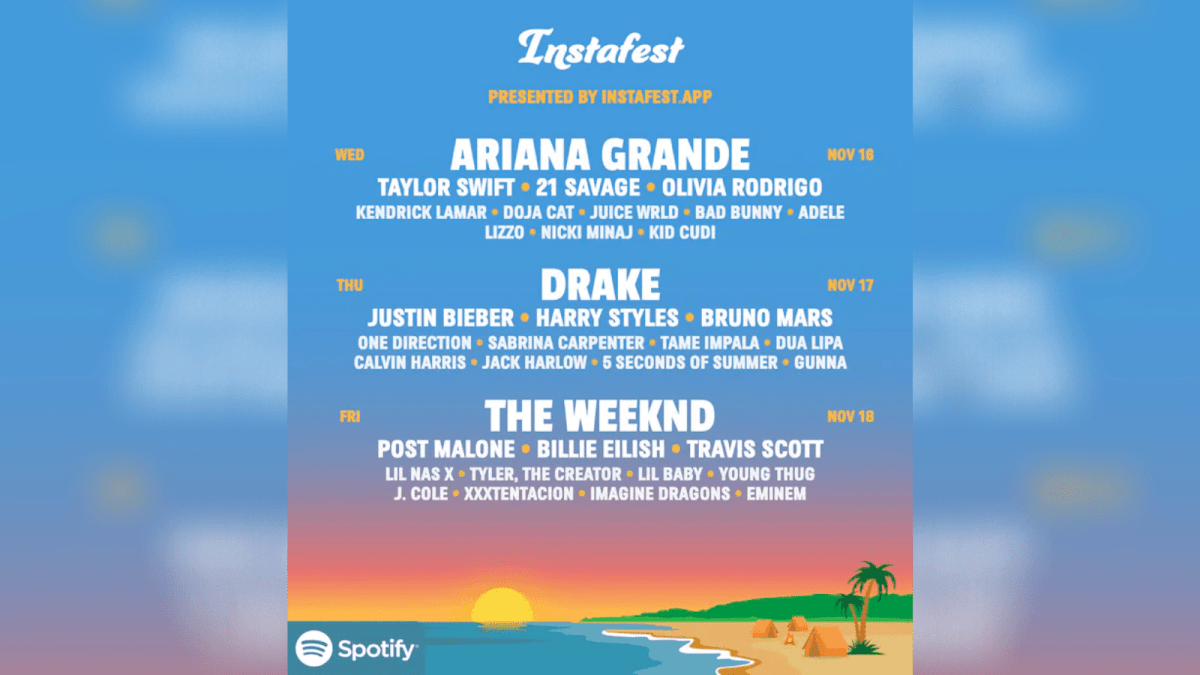 The countdown to Spotify Wrapped 2022 is almost over, with the yearly roundup of your listening habits on the platform likely to become available for your viewing pleasure on Dec. 1, at which point you’ll be able to share your results with the world, if you’re so inclined.

Mere days out from the annual musical data dump, however, a fancy new way of viewing your top artists of the year has emerged which has got music aficionados in a tizzy.

Spotify Instafest is a would-be festival lineup poster of all of the most-streamed artists on a user’s Spotify account. Its appeal undoubtedly stems from people envisioning their dream festival weekend scenario, becoming their own touring company and curating a lineup of acts specifically for the sake of one’s own personal appeasement. Coachella be damned, John or Jane Doe’s hip-hop, punk, dance, metal and jazz festival is the next big thing.

Create your own Spotify Instafest

Coming up with your Spotify Instafest poster is a fairly straightforward affair, though you’ll want to be in front of a computer in order to generate it as the Instafest website isn’t overly mobile-friendly.

All you need to do is head on over to Instafest.app and hit the green ‘Sign in with Spotify’ button. Once your details are in, the next thing you will be greeted with is your Instafest poster in all of its glory, and you’re all set to daydream about your perfect music weekend and agonize over potential timetable clashes.

If you’re a little embarrassed about your Kanye West phase earlier this year before he started behaving like an abhorrent nutcase, you can use the site’s customization and filter him out by trying out the different toggles for the last four weeks, six months, or all-time before sharing the poster on your social feeds using the ‘Save and Share’ button.

You can also add a little bit of a personal touch to your Instafest poster by customizing the background to the twilight, sunrise, and dusk options the app has available to you. If the default festival name tied to your Spotify username is a little too dry, you can change that too.

This should tide you over for the next couple of days until Spotify’s official effort built into the music streaming app comes out to either embarrass or delight you. Although, you’d be forgiven if you thought this year’s Wrapped had already happened, considering an unfortunate glitch popped up on the app’s homepage a couple of weeks ago.