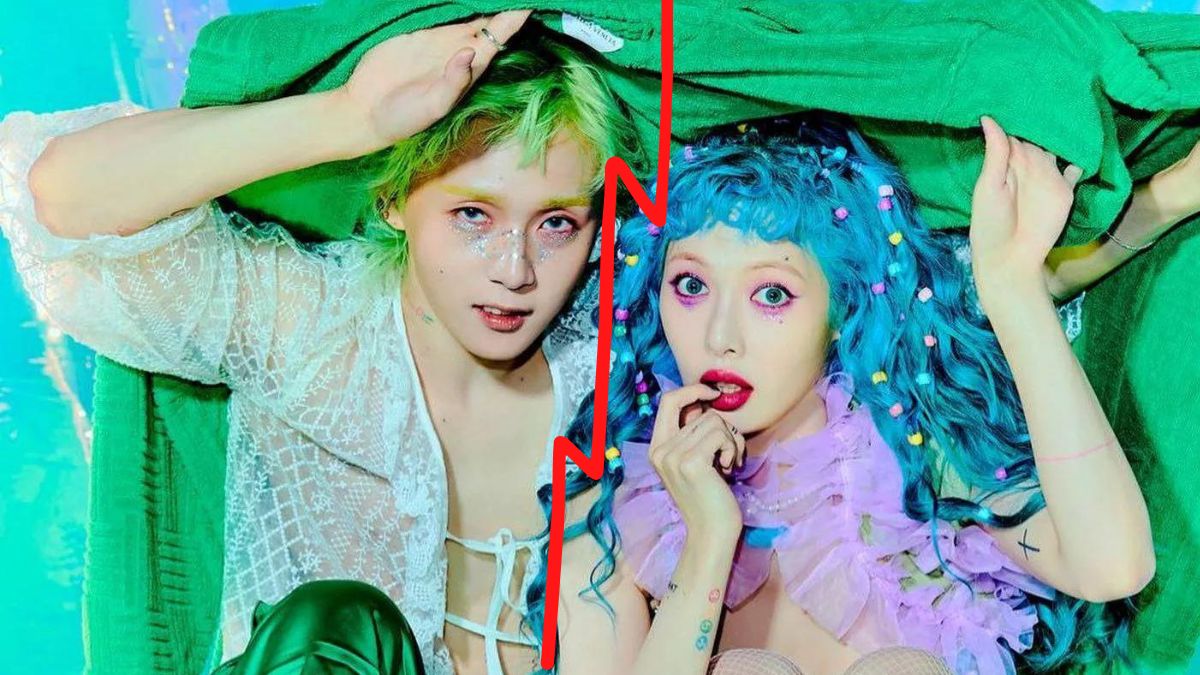 The massive world of South Korean pop music has fully taken over all four corners of the globe. This stratospherical influence and immense musical impact have won over the hearts of millions of fans worldwide. Acts like BTS and BlackPink became the most sought-after artists in the world, and their increasing popularity completely changed the perception of the world of K-Pop. As fans become more invested in their favorite musicians, the interest translates into the artists’ personal lives.

Unlike in the Western music industry, idols’ romantic relationships are somewhat taboo among fans of K-pop groups. In South Korea, many consider these relationships to be a betrayal to fans who have dedicated their time, effort, and passionate support to these artists. There are still, however, many fans who are just as dedicated and supportive of their idols’ personal endeavors, and consequently, every time one of their favorite relationships came to an end, fans would hurt alongside their idols. Here are some of the most hurtful relationship endings in K-pop.

The world of K-pop completely turned upside down when Blackpink main rapper Jennie and EXO’s heartthrob Kai announced their relationship to the public. The news of their relationship was revealed through their agencies back in 2019, but rumor has it, the prince and princess of K-pop actually started going out back in 2018.

According to rumors shared by Dispatch, the ex-couple might have started seeing each other months after the news of their relationship broke out. After some digging from fans on social media, they quickly noticed Jennie and Kai were oftentimes found frequenting the same places, and even posting similar pictures at the same time. This dreamy relationship, however, proved to be short-lived. YG Entertainment and SM Entertainment confirmed the K-pop royalty duo had parted ways just 25 days after the announcement, and four months after they allegedly started dating. The reason behind this heartbreaking split was conflicting schedules and busy lives.

SM TOWN has had their fair share of relationships among idols in the company, but quite none sparked as much ruckus as Taeyeon and Beakhyun. The Girls’ Generation alum and EXO’s former member Baekhyun were first caught together in 2014, but according to the math, the duo’s friendship might have dated back to 2011, when the EXO member was just starting out as a trainee at SM.

The ex-couple never truly hid their relationship. From social media clues to pet names and even couple’s items, Baekhyun and Taeyeon were ready to commit, despite their (short) age-gap. SM Entertainment eventually announced the duo’s relationship, however, they too proved to be a short-term item. Only a year after the relationship was announced, Taeyeon and Baekhyun announced their split due to busy schedule. At the time, EWXO and Girls’ Generation were the biggest groups in the industry, making it a very public breakup, with a widespread looming sense of sadness.

Momo and Heechul’s relationship transcended the K-Pop universe. This loving and downright adorable duo had their first interaction on live television. TWICE and Super Junior joined the crew of Weekly Idol, a popular South Korean variety show. The two groups had to interact and play various games together, and Momo immediately took over Heechul’s heart with her cute mannerisms and good looks.

From then on out, the idols continuously appeared together in selfies, at events, and even in music videos. Their friendship was palpable through the screens, sparking dating rumors from their very first interaction. It wouldn’t be until 2020 that SM Entertainment and JYP Entertainment would confirm the dating rumors, and in spite of their 13-year age gap, K-pop fans and netizens were all about this relationship. Much to everyone’s disappointment, about a year and a half after the announcement, their agencies confirmed that the couple had called it quits, but kept in close touch with one another, with a lingering strong friendship.

Jihyo and Kang Daniel were too busy for love

The relationship between TWICE’s leader and the soloist Kang Daniel lasted for longer than most couples in K-pop. This explosive duo fell victim to Dispatch’s eagle-eyed reporters, who announced the relationship long before JYP Entertainment and KONNECT Entertainment even had a chance. The couple was first spotted together in 2019, and allegedly met through a mutual idol friend who introduced them.

According to Dispatch, the couple would allegedly go on dates at a much more private setting at Kang Daniel’s house, and at some point, this relationship could no longer be ignored. About a year and a half after their agencies confirmed the relationship, the TWICE vocalist and the rapper parted ways, and much like most K-pop couples, the reason behind the split was their busy schedules, and for simply not having time for a relationship.

Sulli and Choiza’s relationship started off rockier than most, finding its tragic ending in 2017. The vintage rapper Choiza from Dynamic Duo and F(x)’s late star Sulli announced their relationship in 2014, with plenty of controversy surrounding their connection. The couple had a 13-year age gap between them, with Sulli being far younger than the hip-hop artist. Many wholeheartedly believed Choiza to be taking advantage of Sulli, due to his overly sexualised lyrics about their relationship.

In spite of the backlash, the couple lasted until 2017, when SM Entertainment announced their breakup. While that could’ve been the last of it, after Sulli’s tragic passing in 2019, Choiza was again under fire for allegedly being at the source of the singer’s mental health detoriating, including being at the receiving end of backlash from Sulli’s own mother. Although this relationship wasn’t exactly popular among fans, Sulli’s death by suicide weighing on Choiza’s shoulders is still enough to give anyone chills.

The latest K-pop starstruck couple to have called it quits is, none other than everyone’s favorite romantic tale, HyunA and Dawn. Their relationship dates back to 2016, when they were first paired together in a group consisting of HyunA, Dawn and Hui, called Triple H. Although they had been together for two years, it wouldn’t be until 2018 that everyone would discover they were an item. Previously part of Cube Entertainment, the couple was let go by the company that was less than pleased that they announced the relationship without the agency’s permission.

HyunA and Dawn eventually signed with Psy’s label, P Nation, and were able to freely share their loving and unbreakable relationship to their fans. Unfortunately, this longterm relationship would too see an end, to everyone’s surprise. In November 2022, the now-engaged couple announced their breakup, as millions of fans’ hearts shattered across the globe. The duo guaranteed that they still maintained a close friendship, denying any malacing rumors that began circulating online. In spite of of their tight bond, fans on social media still grieved their relationship, proclaiming that love was officially dead.

Naturally, over the years, there have been plenty of relationships among idols – whether the fans became aware of them or not. Some relationships are successful, leading to the couple’s migration from music to a calm environment at home together, but as we all know, that is not always the case. At least fans can find solace in knowing that some of these relationships still endure – even if it’s in the form of a strong friendship.