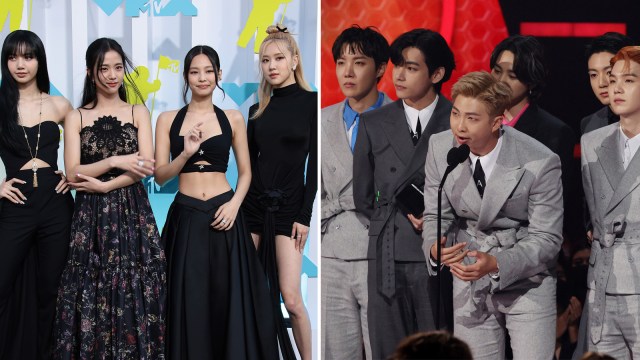 It was that time of the year again — MTV’s Video Music Awards were upon us and the night was for celebration. Or at least, it was supposed to be, but because nothing ever goes according to plan, celebration wasn’t the only thing happening that night. While everything seemed perfect at the event, a storm was brewing online between BLACKPINK‘s and BTS‘ fandoms.

After very recently having released their new single, “Pink Venom,” the all-female K-pop group BLACKPINK made its debut appearance on the VMAs’ red carpet this year, with nominations for Best Metaverse Performance and Group of the Year awards, in addition to Lisa’s solo nomination for Best K-pop. Coincidentally, BTS was also nominated for these same categories, and naturally, some rivalry was to be expected between the BTS ARMY and BLINKS. After all, a little dash of competition never hurt anyone.

The actual issue arose when a few news outlets announced BLACKPINK as the Group of the Year via Twitter, before the winner was actually revealed. Although the tweets were later deleted, some people captured and shared screenshots of the occurrence online.

While BLINKS celebrated, of course, BTS fans didn’t take this well and were quite incredulous about this outcome, claiming it would have been impossible for BLACKPINK to surpass BTS in a fan vote, considering the ARMY is the bigger fandom. In addition to this, a tweet made by MTV News on Aug. 15, affirming the Korean girl group would make history twice at this year’s VMAs, led some to believe that BLACKPINK’s win was something pre-determined.

Some Twitter users also went as far as claiming that BLACKPINK’s nomination for Group of the Year, as well as their presumed win, were bought by their company, YG Entertainment, as the band was inactive during the eligibility period for the award.

At the end of the day though, BTS was the one to take home the award for Group of the Year, leading some ARMY to speculate on a possible last-minute switch, after the backlash being received online. While we may never know what actually originated the wrongful winner announcements, one has to consider the possibility that a news Twitter account may have simply mistaken BLACKPINK’s Best Metaverse Performance win for the Group of the Year, and the other news outlets followed along. As of right now though, everything is up in the air.

Despite all rivalry and theories, one thing is for certain: both BTS and BLACKPINK ended the night as winners, and both fandoms were overjoyed for their respective accomplishments.