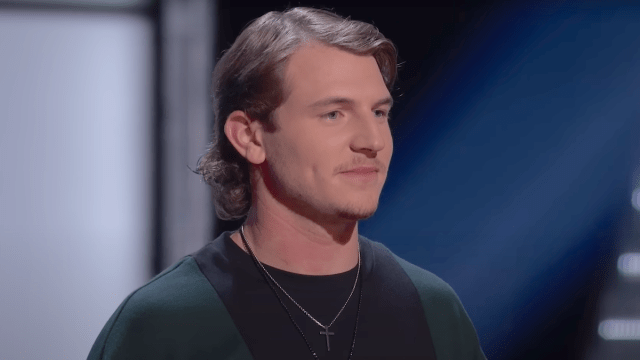 It looks like The Voice has yet again uncovered a serious contender for this season’s competition. Columbus, Ohio native Ian Harrison walked out on stage and quickly impressed his potential coaches with his soulful singing chops and earning a “that’s a cool voice” compliment from returning coach Gwen Stefani out of the gate.

Harrison’s impressive pipes had coach Blake Shelton hitting his button one minute into his blind audition rendition of Lord Huron’s “The Night We Met” with John Legend and Gwen Stefani following suit just a few seconds later. But despite Shelton’s quick on-the-draw button pushing, Harrison ultimately opted to go with Shelton’s wife, Stefani, as his coach — and Stefani’s impassioned case for why they should work together no doubt influenced his choice — or maybe he just overheard her initial compliment?

So who is Ian Harrison? Here are some of the things we know so far:

Ian is 20 years old and currently attends classes in his hometown at Columbus State University. He tends bar between classes and works on his music which runs a gamut of styles, from alt to country to pop.

According to his Instagram, Harrison has a girlfriend named Madison. In December of last year, he wished her a happy one-year anniversary, so the couple may end up celebrating two years together during the finale rounds of this year’s competition.

The pair recently traveled to Destin, Florida for a “quick trip” with friends, and, judging by the poolside pics, it looks like one of Harrison’s pastimes is hitting the gym regularly.

In Harrison’s intro package to The Voice, he revealed that he had been profoundly impacted by the death of his father who tragically took his own life when Ian was only nine years old. When he inherited his father’s guitar, as well as a series of notes in its case, he took it as a sign to pursue his own dream of becoming a musician.

His family, which includes his adoptive father, who entered Ian’s life shortly after his father’s death, are all supportive of his musical dreams and cheered from backstage as each coach turned around in their chairs.

We’ll see if being on Team Gwen will bring Harrison the music career he’s been dreaming of as season 22 of The Voice continues its run.

The Voice will air Mondays and Tuesdays at 8 pm PT/ET on NBC through the fall season.