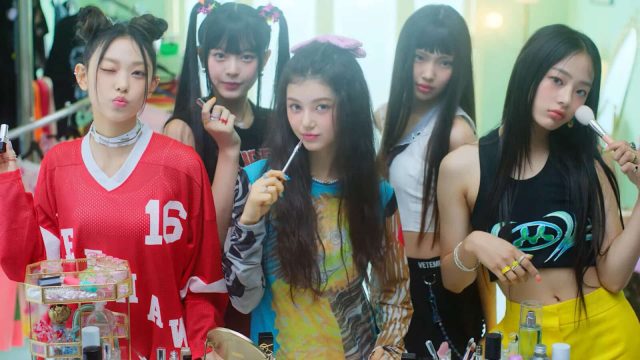 On July 22, 2022, HYBE finally unveiled a new girl group. NewJeans is a quintet and the first act run by the company’s independent label ADOR (All Doors One Room) and put together by CEO and head producer Min Hee-Jin. Their concept, members, and name were all kept secret prior to the release of “Attention,” the group’s first single. There weren’t even any teasers. And that was all part of the strategy.

With NewJeans (뉴진스), ADOR bet on the revival of the early 2000s. The group’s style and sound strongly resemble what was popular back then, which is sure to please the more nostalgic pop and R&B fans. Their debut EP, which officially marks the date of their debut, comes out on August 1, 2022.

The five girls are all teenagers born between 2004 and 2008. They are: Danielle, Haerin, Hanni, Hyein, and Minji. If you want to know more about who is who, as well as their ages and their home towns, keep reading.

Every NewJeans member and their ages

Danielle Marsh, whose Korean name is Mo Jihye (모지혜), is an Australian-Korean vocalist and dancer who can speak both English and Korean fluently.

Kang Haerin (강해린) is one of the vocalists and dancers in the group.

Hanni (하니) is a vocalist and the primary dancer in NewJeans. She was born in Vietnam and raised in Melbourne, Australia, and speaks Vietnamese, English, and Korean. Her Vietnamese name is Phạm Ngọc Hân. Prior to her debut, she had a cameo in BTS’ music video for “Permission to Dance.”

Lee Hyein (이혜인) is the group’s youngest member, the maknae. Also a vocalist and dancer, she was part of the kids group USSO.GIRL from 2017 to 2018 under the stage name U.Jeong (유정).

Kim Minji (김민지), who is a vocalist and dancer as well, also had a previous cameo in BTS’ music video for “Permission to Dance.”